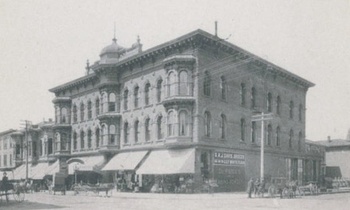 The Gooch Block (1876) was designed and built in 1876 by John S. Tibbals for A.J. Gooch, and is located from 817 to 829 Washington Street. The upper floors of the building were originally the site of the Winsor Hotel (later the Rex Hotel), but have now been converted to office space. 1 Since the 1930s, the building has been owned by the Ratto family and their descendants (currently the Durantes), owners and operators of Ratto's Market and Deli on the ground floor.

An 1876 article describes a mini building boom that was occurring at the intersection c.1876. (Though it says Mr. Good instead of A.J. Gooch.) 5

The names of Tibbals and Gooch and the date can still be seen on the front step leading to the former hotel entrance.

At some point before c.1940 the dome on top was removed. 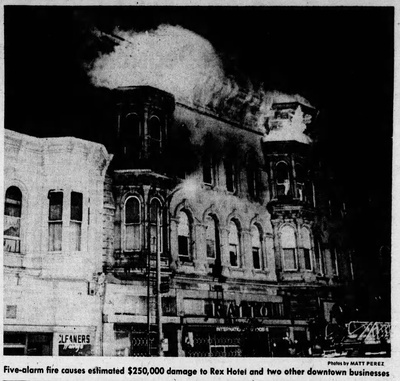