Grace Community Methodist Church was a Methodist church in East Oakland at 2385 - 103rd Avenue beginning in 1935. Initially it took the name of Grace Methodist Episcopal Church, a former Methodist church in West Oakland, but it doesn't appear to have any connections besides the name, as there was a gap of more than 10 years. A 1947 article traces things back to a local Sunday school led by Rev. P.T. Lynn in 1927. 2 Later the church was known as Grace Methodist Church.

The church first met at 10303 Foothill at the corner of Frazier. In 1935, there were plans to build at 103rd Avenue near Foothill using the older name 1 but it's unclear if a structure was built then. In 1937, a church structure was moved to the 103rd Avenue site. A parsonage was built in 1942, and a new sanctuary building constructed in 1947. 2

Following a fire in 1960, repairs were made to the sanctuary, and a new fellowship hall was built. 3

The church was around until at least 1973, when they paid off their debt. 4 The building is now home to Fale Maama Tongan United Methodist Church. 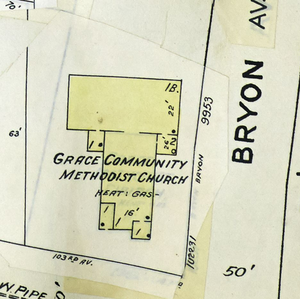 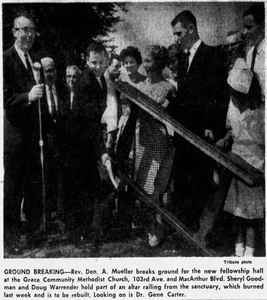