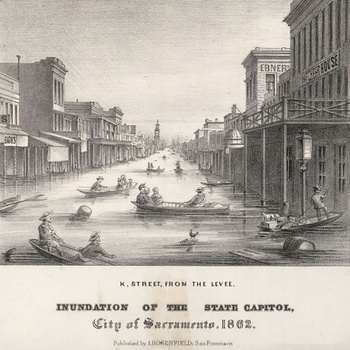 lithograph of Sacramento from usgs.govThe Great Flood of 1862 was a devastating flood affecting all of California, including flooding the Central Valley and the San Joaquin Valley. The direct effects on Oakland were relatively minor as it was still sparsely populated at the time, but it had a major effect on the economy of the whole state. It started with a 43-day series of storms beginning in December, 1861, and bridges, buildings, and entire towns were swept away.

Sixty-six inches of rain fell in Los Angeles. The city of Sacramento was inundated, and after rowing back to his mansion, newly-inaugurated governor Leland Stanford moved the capitol to San Francisco. 2 The state went bankrupt, as an estimated 1/4th of the taxable property in the state was destroyed. Approximately 200,000 of the 800,000 cattle around the state drowned, and began shifting the economy from ranching to farming. 1

The oyster beds near Oakland were damaged by the great influx of fresh water coming from the delta. 3 The rain washed out many bridges and roads around Oakland, so getting in and out of Oakland was difficult. 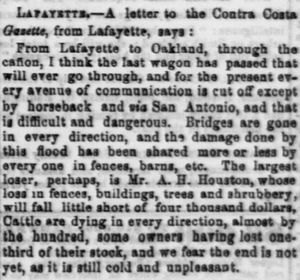