The opening of Oakland's first Green Bicycle Pathway, known as a 'Supersharrow' was announced by the City on September 17th, 2013.  After 40th Street was recently repaved, it was striped with the wide clearly visible lime green bike pathway which is meant to be a shared space for both bicyclists and motorists, and not just a dedicated bike lane.

The city gives the following instructions: 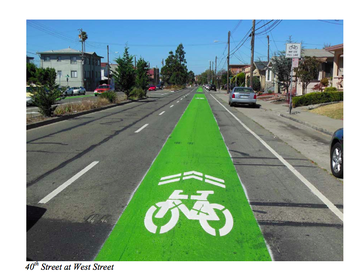 image from the city press release

Portions of the City Press Release (full release attached below):

Oakland, CA – The City of Oakland is innovating with an experimental design on 40th Street: green color in the travel lane to help bicyclists and motorists share the road. The project seeks to improve access for bicyclists between MacArthur BART, Piedmont Avenue commercial district, Emeryville, and the new bicycle/pedestrian path from 40th Street/Shellmound Road to the new eastern span of the Bay Bridge.

The experiment features shared roadway bicycle markings (sharrows) highlighted by green color located in the travel lane. While green color is now approved for standard use in dedicated bike lanes, the 40th Street project is innovative for using green color in a lane shared by both motorists and bicyclists. Such experiments require approval by State and Federal regulators. Oakland Public Works is conducting the experiment with the Federal Highway Administration and California Traffic Control Devices Committee.

The goal of the experiment is to enhance safety by addressing common problems where bicyclists and motorists share lanes. Bicyclists often ride in the “door zone”: the area immediately adjacent to curbside parking into which car doors open. Motorists often squeeze by bicyclists, passing too closely. The California Vehicle Code allows bicyclists to use the full travel lane where the lane is too narrow for a bicycle and a vehicle to travel safely side by side. The ‘green’ treatment will assist bicyclists and motorists in sharing the road. Here are suggestions for both:

The City of Oakland’s Bicycle Master Plan calls for citywide bikeways to connect neighborhoods, BART stations, commercial districts, downtown, and the waterfront. At MacArthur BART, the number of bicyclists increased by 123% from 1998 to 2008, making it the fourth busiest for bicyclists out of the 43 stations in the BART system. Another big increase in bicyclists is anticipated with the completion of the MacArthur Transit Village – now under construction – which includes a new bicycle parking facility. The City is promoting bicycling as healthy, non-polluting and affordable transportation to realize its sustainability and livability goals.