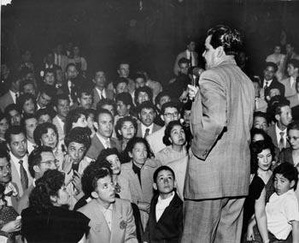 Guadalupe Talking to the crowd at Sweets Ballroom 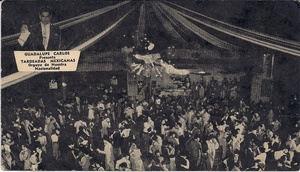 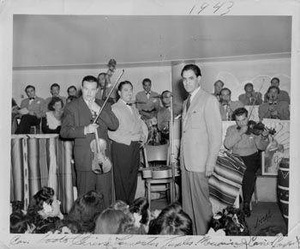 Guadalupe ("Lupe") Carlos was a Latino music icon in Oakland. He worked as a promoter and shipyard steel worker and he was one of the fathers of the Latin music scene in Oakland and the East Bay.

Born in Mexico, Carlos immigrated to Oakland in the early 1920s fleeing the Mexican Revolution. He made his home in West Oakland which at the time had a thriving Mexican community. In the 1930s he was working for the Todd Shipyard in Oakland when he began organizing Sunday Mexican dances called Tardeadas meaning "Sunday afternoon parties" at Sweet's Ballroom on Franklin St. in Downtown Oakland. At the time, certain races had certain nights at ballrooms and clubs, largely due to racism and discrimination. Sunday was usually the day reserved for Mexicans and Latinos in general. 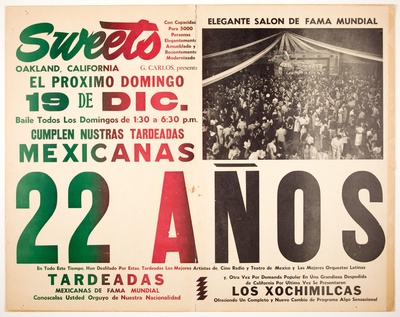 poster c.1955
from OMCA Collections, gift of Charles Hector CarlosGuadalupe Carlos was a good talker and hustler: he even would go as far as traveling to Mexico to book bands to come to Oakland, even while he was doing his day job as a steel worker. Guadalupe made Sweet's Ballroom his main place of doing Latin Dances. Mexicans and Latinos from all over the Bay Area would come to Oakland to Sweet's Ballroom to dance up a storm. Zoot Suiters and Pachucos came as well. At the time, the popular music was Mexican mariachi music and Afro-Cuban mambo music. The Merced Gallegos Band became the house band for Sweet's BallRoom after Guadalupe Hired them. Another popular band was the Salvador Guerrero Orchestra.

Carlos' Sunday Tardeadas were a big social gathering for the Latino community of Oakland and the East Bay; many people that remember both Mr Carlos and Sweet's Sunday Dances say it was a big part of their memories growing up in Oakland during the 30s 40s and 50s. The Tardeadas faded into history in the 60's, especially after the urban renewal of West Oakland that caused many of its Latino residents to move to East Oakland or to other cities in the Bay Area.

Don't have details of where in Mexico he was born or his Birth day or date of Death but will find out and update the info on this page.

Carlos was married to the eldest sister of Natividad Ramos of La Borinqueña.