H. G. Prince & Company operated a large fruit packing plant on the corner of East 11th and 29th Avenue in the Fruitvale District. Originally located in San Francisco where the company began in 1868, it incorporated in 1902 as Code-Portwood Canning Company, with Henry G. Prince as one of the directors. Following the 1906 San Francisco Earthquake, the cannery hurriedly finished plans to relocate to a much larger location in Oakland. 3 The company proudly stated they were "Packers of California's Most Carefully Selected Preserved Fruits, Vegetables and Catsup."

Code-Portwood became H. G. Prince & Company in 1913. 2 In 1917, they built a large addition to the plant, almost doubling the capacity. 5,6 (This building is now known as the Lucasey building, for its last industrial tenant.)

With the abundance of transportation and water, Oakland was the ideal spot for canneries, several of which were major employers in the city. Produce throughout California was transported into Oakland. During the administrations of Mayor Mott and Mayor Davie fruit canneries were an important economic enterprise in Oakland, second only to the shipbuilding industry. In 1926, H. G. Prince had 3,500 employees in Oakland, 800 of them at the 29th Avenue plant.

In 1928 the California Packing Corporation purchased the H. G. Prince Company. Del Monte was interested in H. G. Prince's patented machine for pitting cling peaches. When they couldn't get the patent, they bought the company. The H. G. Prince name was kept on labels until at least the 1940s. The plant became Del Monte plant #24. 1 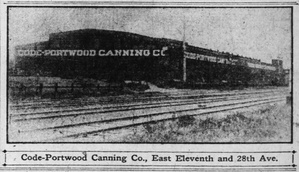 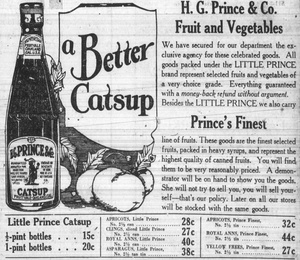