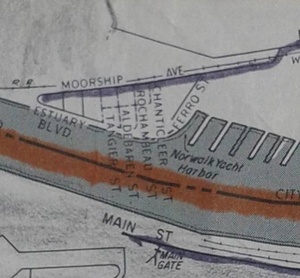 Harbor Homes Housing Project was a temporary housing project built by the federal government in 1943 during WWII to house some of the many workers who came to the Bay Area. Like many other projects at the time, it was segregated, with blacks and whites separated. And like other temporary housing, it lasted well past the end of the war. It closed for good in 1963.

The project had 483 units. 4 The land is now covered by Port of Oakland operations; the only street remaining is Ferro St. The other streets were Chanticleer Street, Rochambeau Street, Aldebaran Street, Tangier Street, Estuary Blvd., and Moorship Avenue (Mooreship in some records). Early on it was sometimes referred to as Moore's Harbor Homes, or Harbor Homes at Moore Shipyards.

A number of the projects almost stopped accepting new residents in 1953, but a government order allowed them to continue. In 1955, the Port Commisioners voted to continue leasing the land to the Oakland Housing Authority at the rate of $22,869 per year. 1

Until a sewer line was built in 1955, sewage from the project was dumped directly into the bay. 8

In 1958, a recreation center and clubhouse for meetings was created by combing two temporary buildings 5 at 16 Chanticleer Street.

R&B singer Freddie Hughes grew up in Harbor Homes. 6 Local businessman and Oakland booster James Copes lived there from 1954 to 1956. The mother of councilmember Lynette Gibson McElhaney lived there.