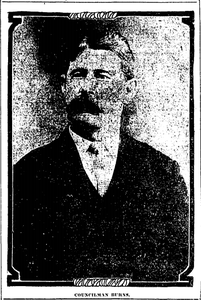 Councilman Burns was very involved in the wharves and harbors of Oakland in the early 1900s and served on the Wharves and Water Front Committee on Council. In 1907 he called for a "State Harbor Commission" to undo some of the damage done in 1852 with awarding the waterfront to Horace Carpentier. In 1852, Oakland "wharfed out" the waterfront to Carpentier who subsequently leased it to Southern Pacific Railroad for 37 years. By 1907 the rights had reverted to Oakland. Burns wanted to make sure that the railroads could all access the water.2

A week after calling for the State Harbor Commission, Burns changed his mind on the matter. He decided that the city was capable of administering the wharf stuff and that a commission might not make choices in Oakland's favor.4

Later that year, Oakland was in the process of building "free city wharves" for the city. Burns wanted to raise bonds for $200,000 but the Harbor League called for ten times the amount: they asked the Council to pass ordinances for the amount of $2,000,000.5