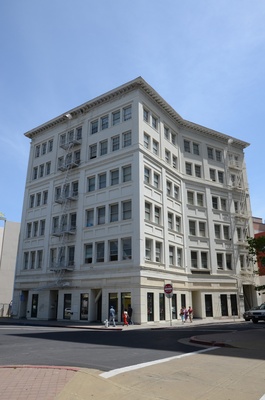 Heald's Business College was the first business college in the Western U.S., and was founded by Edward Payson Heald in San Francisco on August 8, 1863. Later it was known as Heald Colleges.

Before Heald opened a branch in Oakland, numerous residents made the trip to San Francisco to attend Heald. By June, 1906, there was an Oakland branch in the Bacon Block. The original S.F. branch had moved to 1451 Franklin St. (possibly because of the earthquake?)

The building at 16th was originally built as a 4 story building. In 1918, 2 stories were added; Heald occupied the top 3 floors. 5

For many years, Heald was a top business college. A 1938 article reported that 93% of its graduates that year found business jobs. 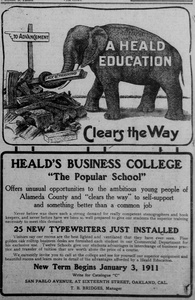 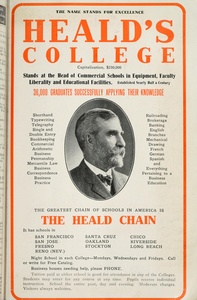 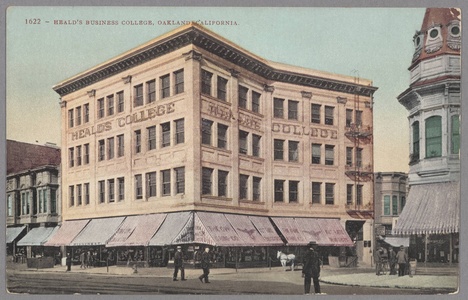 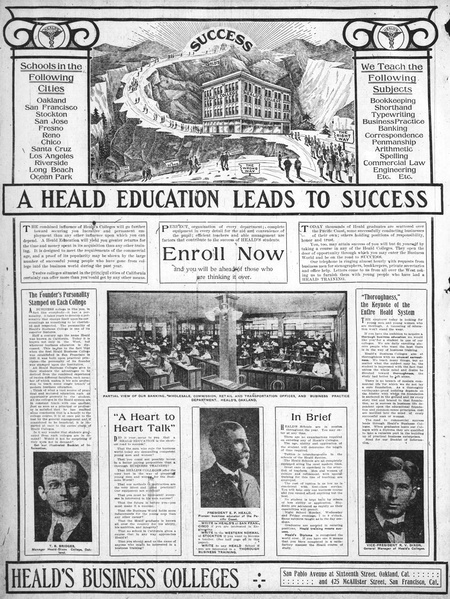 Over the years, the college evolved from business courses to also include degrees in healthcare, legal and technology fields. In 2000, Heald had 12 campuses in California, Oregon and Hawai'i, and Larry Barton became president. 1 The 10 California locations were in San Francisco, Concord, Hayward, San Jose/Milpitas, Salinas, Rancho Cordova, Fresno, Stockton, Modesto/Salida, and Roseville.

in 2001 it changed its name to Heald College. In 2007, the colleges were purchased by investors and changed to a for-profit college.

In 2009, Corinthian Colleges, Inc. purchased the colleges, and in 2011, announced plans to change to an all online format, though keep the instructors and staff.

After various investigations and a $30 million fine, 4 on April 26, 2015, Corinthian Colleges closed down all their schools including Heald, as well as Everest and WyoTech. Then president and CEO of Heald, Eeva Deshon tried to get the state to allow Heald to be sold and thereby survive, but was unsuccessful. 2