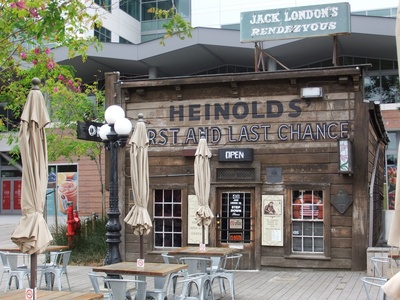 Heinold’s First and Last Chance Saloon is an historic bar in Jack London Square. The saloon was constructed out of lumber salvaged from the stern-wheel paddle steamer Umatilla,2 sometime between November 1870, when the abandoned hulk of the Umatilla was obstructing the construction of the first bridge across the estuary to Alameda,3 and probably mid-summer of 1874. By 1883, a man named Johnson operated a saloon in the building, but could not make a success of it. He sold the business to John Michael "Johnny" Heinold for $100, and on June 1, 1884, Johnny opened for business. The saloon has been in business ever since, in its original building and location, not closing for the 1906 earthquake or during Prohibition. The floor is sharply tilted, resulting from pilings underneath shifting in the 1906 earthquake.

An old, often repeated story about the name, First & Last Chance, that "during the 1920s, Alameda was a dry town" is simple make believe. From 1920 to 1933, all of California and the rest of the United States - not just Alameda - was dry. Charmian London was probably closer to the truth when she wrote, "the stamping-ground of the water-front habitués ... bore this two-faced pseudonym by reason of its accommodating relation to comers as well as goers across the drawbridge." 4 There may also have been an early baseball connection: "The horse car ran across old Webster street bridge, and its passengers en route to and from the ‘Greenhood and Moran’ baseball games, near what is now Neptune Beach, all tumbled off at Johnny’s for their ‘first and last’ drink." 5

As a schoolboy in the late 1800s, Jack London studied at Heinold’s. In his autobiographical memoir, John Barleycorn, Jack wrote that he sealed the purchase of his first ship, the Razzle Dazzle, with a shot or two at the bar, when he was only 15. Jack later confided in owner John Heinold about his ambition to attend the University of California. Heinold loaned him tuition money, but Jack only lasted a semester at the University. He later returned to Heinold’s where he wrote his notes for The Sea Wolf and Call of the Wild. Heinold’s is referenced 17 times in John Barleycorn. 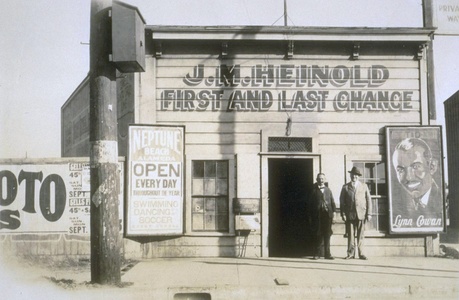 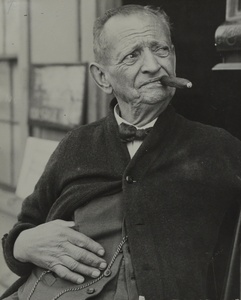 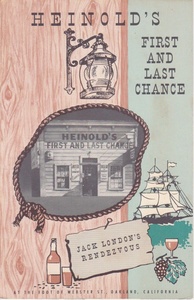 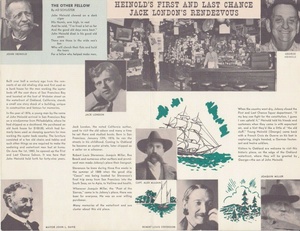 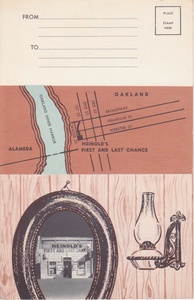 THE OTHER FELLOW
By AD SCHUSTER
John Heinold chewed on a dark cigar
His thumb, arm high, in vest
And he said, "I've lived a lot so far
And the good old days were best."
John Heinold died in his good old years
There are those in the wide sea's ken
Who will clench their fists and hold the tears
For a follow who helped make men.

Built over half a century ago from the remnants of an old whaling ship and first used as a bunk house for the men working the oyster beds off the east shore of San Francisco Bay and located at the foot of Webster street on the waterfront of Oakland, California, stands a small one story shack of a building, unique in construction and famous for memories.

In the year of 1876, a young man by the name of John Heinold arrived in San Francisco Bay on a windjammer from Philadelphia, where he had shipped as a deckhand. He purchased on old bunk house for $100.00, which had formerly been used as sleeping quarters for men working the oyster beds nearby. The furniture consisted of a few old chairs and tables and such other things as are required to make the sealaring and waterfront men feel at home. On June the 1st, 1883, he opened up the First and Last Chance Saloon. It was here that John Heinold held forth for forty-nine years.

Jack London, the noted California author, used to visit the old saloon and many a time he sat there and studied books. Born in San Francisco, January 12th, 1876, he ran the streets in his childhood. Coming to Oakland he became an oyster pirate, later shipped as o sailor on a schooner.

Stevenson he knew during those five weeks in the summer of 1888 when the good ship "Casco" was being loaded for Stevenson's final trip away from San Francisco into the South Season to Apia, to Voilima and health.

Whenever Joaquin Miller, the "Poet of the Sierras," came in to Johnny's place, there was beer for everyone. He was an over willing purchaser.

Many memories of the waterfront and sea cluster about this old place.

When the country went dry, Johnny closed the First and Last Chance liquor department. "lf my boy can fight for the constitution, I guess I can uphold it." Heinold told his friends and customers when they came in with expectant air, and a hint they'd like a little of the old stuff." Young Heinold (George) come back with a French Croix de Guerre on his feat in capturing, single handed, a German lieuten: ant and twelve soldiers.

Visitors to Oakland are welcome to visit this historic place, on the edge of the Oakland waterfront, where they will be greeted by George the son of John Heinold.

Heinold’s is popular both with visitors to Jack London Square and with residents. The bar’s interior is small, dark and (as noted) steeply sloped, but its adjacent dog-friendly, smoke-free patio is a favorite on sunny days. A large mural featuring Jack London is painted on the side of the building, and several plaques note its landmark status. The place has a full bar, but no food. If you want to drink on the patio, alas, you must do it from a plastic cup.

Johnny Heinold died in 1933, after the law changed to allow 3.5% beer, but before Prohibition finally ended. His son George Heinold took over, and ran the business until his own death in 1970. George's widow, Marge Heinold, took over just before George's final illness. The owner for the last 31 years has been Carol Bookman, who purchased the business from Marge Heinold in 1984. 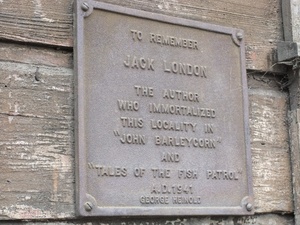 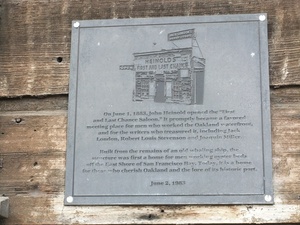 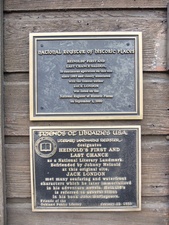 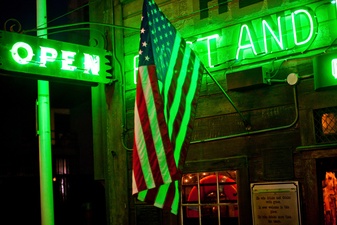 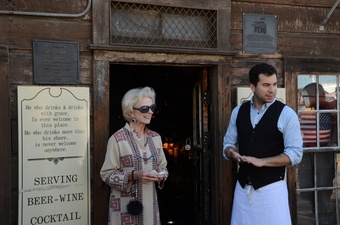 Every Year Heinold’s is the meeting point for the East Bay contingent of Santacon who imbibe, take a group photo, and ferry over to meet the SF Santas. (photo and another)