Although he lived in Piedmont, it appears this businessman had many dealings in Oakland, along with his brother, Charles Butters.

He was married to Lucie Beebee (Butters - Edwards), and together they were the parents of Henry A. Butters Jr. (1892–1916), Lucile Butters, and Margaret Butters. He was also married to Mary Belle Davis (Butters) in 1878; she died in 1890. David Samuel Edwards fits in here somewhere, too...

Henry, Jr.(Harry) died in action in WWI, and is the namesake of Butters Drive and Butters Canyon. 1 He joined the British Army before U.S. involvement. He died instantly when he was struck directly by a gas shell while in the trenches. 2

Bit of a scandal at the time of his death, due to the separation from his wife. They disagreed about using their property to back business investments.

Henry and Lucie are buried in Saint Mary's Cemetery, in Oakland. 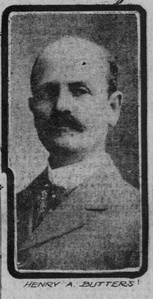 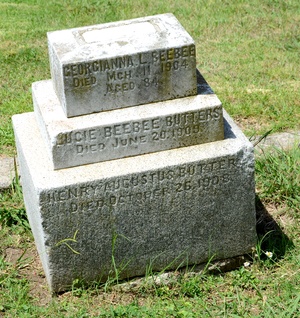 OAKLAND, Oct. 26-Henry A. Butters, president of the Northern electric railway company, capitalist, mining magnate, street railway constructor of worldwide note, associate of the late Cecil Rhodes in South Africa and one of the foremost figures in the financial activities of California, died at 3 o'clock this morning at the home of his aged mother, Mrs. Sarah L. Butters, 2624 Telegraph Avenue, Berkeley, after an attack of congestion of the lungs with which he was stricken Friday evening. It was more than a year ago that Butters left his mansion, in the Piedmont hills, where his estranged wife resides.

Business cares, coupled with family differences, had greatly exhausted Butters' vitality, and a cold developed speedily into congestion of the lungs. With him at the end were his brother, Charles Butters, his associate in many of his earlier enterprises; his sister, Mrs. P. R. Boone of Berkeley, and his mother. Mrs. Butters, the widow, was notified at her home, Alta Vista, of her husband's death an hour after it had occurred. She went to the Berkeley residence later in the day.

The separation of Butters and his wife came at a time when the capitalist was in need of ready money to finance his projects after the disaster of 1906. He had previously transferred to her property valued at $500,000, including the Palmerstone block at Sixteenth Street and San Pablo Avenue in this city. Mrs. Butters, it is stated, did not share her husband' view that the property should be used to assist his industrial enterprises, and from this disagreement followed the differences which led to the separation.

Butters lived for a time at the Cosmos club in San Francisco and later removed to the home of his mother (Sarah Finney Butters) in Berkeley, but he never visited the beautiful mansion in the Piedmont hills.

Butters was married twice, but there are no children from the first union. His second wife, now his widow, was formerly Mrs. David Edwards and later Mrs. Lucy Sanctella, widow of an officer in the United States geodetic survey. Paulding Edwards, who recently married Miss Dolly Tarpey, is a son of Mrs. Butters by her first husband. Mrs. Butters' daughters, Miss Marguerite and Miss Marie, were adopted by the capitalist. Miss Marguerite Butters is the fiancee of Victor N. Metcalf, son of the secretary of the navy, besides his brother, sister and mother in California, Butters is survived by another sister, Mrs. S. D. Field, who lives in Stockbridge, Mass.

In his will Butters has ignored all of his relatives but his son- later killed in WWI. His holdings will run well into the millions, but no exact estimate can be formed at this time. The property includes street railways in the capitals of South America and Europe, vast mining enterprises in South America, California and Central America and interurban electric railroads, as well as real estate, stocks and bonds. Henry Butters was born, 58 years ago at Haverhill, Mass. He came to California when he was 14 years old. After attending the old College of California he was with the book publishing house of Bancroft & Co. and subsequently was in life insurance work. Butters was attracted to Leadville, Colo., by the great mining excitement of 1878. For years afterward, with his brother, Charles, he was actively engaged in mining and other large enterprises which formed the basis of his fortune.
Charles went to South Africa and became identified with the great development of the Johannesburg and generally the Transvaal mining wealth. Henry followed his brother to the land of the Boers. His wife and their son, Henry A. Butters Jr., joined him there.

In association with Cecil Rhodes, John Hays Hammond, Werner, Beit, & Co. and other distinguished South African promoters, Butters became the pioneer of electrical development in South Africa. So successful were his operations that he subsequently interested his backers in the Transvaal, so that he installed electric railways in Geneva, Switzerland; City of Mexico; Lisbon, Portugal; Valparaiso, Chile and some of the European capitals.

Henry Butters was fortunate enough to escape capture as a result of the Jameson raid, which preceded the Boer war. Charles Butters, however was imprisoned with John Hays Hammond and only liberated by Oom Paul Kruger [AKA Stephanus Johannes Paulus Kruger, 5th President of South Africa], after the payment of heavy ransom.

After spending several years abroad in his large operations, Butters, with his family, returned to Oakland in 1895. But it was not long before he became a heavy investor and an organizer of new projects. His most noteworthy effort was that of the Northern electric, a line from Chico to Sacramento, and planned to girdle the Sacramento valley, ultimately striking the bay cities. Associated with Butters were Louis Sloss, E. R. Lilienthal, Eugene de Sabla Jr., W. P. Hammond, John Martin and others.
Butters gave of his very life's blood to make this enterprise a success. He sacrificed much that he loved best; his love of flowers, his horses and his works of art.
He was extremely generous and philanthropic. Butters gave liberally to all public affairs, and his private benefactions were numerous. He was accounted, in business life, a constructive promoter, not a speculator nor theorizer.
The funeral will be held Wednesday morning at 10 o'clock from the church of St. Francis de Sales. Rev. Thomas McSweeney will officiate. The honorary pallbearers will be E. R. Lilienthal, E. J. de Sabla, Louis Sloss, A. D. Schindler, Ferdinand Reiss Jr., Charles W. Slack, A. M. Seymour, George W. McNear Jr., Charles G. Wingate and M. F. Tarpey.

San Francisco Call, Tuesday, October 27, 1908, Page 13, Image 13, Column 7 -
DEATHS
Butters, Henry A.....58
---
Henry A. Butters Buys the Tramway
System of the City of
Mexico
Intelligence comes from the City of Mexico that a former Californian, Henry A. Butters, has just computed negotiations for the purchase of the entire tramway or transportation system of the City of Mexico.
It is reported that the rights-of-way, franchises and rolling stock were valued at $12,000,000, which Mr. Butters and his associates decided to pay. It is known that the City of Mexico has in progress a complete system of drainage, and now the introduction of modern facilities of rapid transit, such as electric cars give, will mark another step in metropolitan advancement.
Mr. Butters, who has just concluded these important negotiations, made considerable money in mining enterprises on the Pacific Coast. A group of Oregon mines owned by him and his brother yielded a large revenue for several years. The brothers were well known in mining circles of California, as they resided much of the time in this State.
About four years ago the brothers Butters went to South America. Like many other practical mining men, they were active in the development of the rich mines of that region, and as a result acquired immense wealth.
At last accounts one of the brothers was in South Africa and figured among the Americans who had been detained for inciting revolt against the peace and dignity of the Boer republic.
Mr. and Mrs. Henry A. Butters, accompanied by their daughter, Mrs. Robert Augustus Bray of Fruitvale, arrived in the City of Mexico in February and have been sojourning there since. They expect to arrive in San Francisco the latter part of this month or early in April.
The inference is plain that Mr. Butters has decided to withdraw from mining ventures in South Africa and engage in the transportation business in Mexico.