Henry Alexander Melvin (September 28, 1865–April 24, 1920) was a judge in Oakland and later an associate justice of the California Supreme Court.

Henry attended Franklin Grammar School and Oakland High School. [ c.1885, Henry was living in Oakland at 358 East 14th Street. ] He attended the University of California, and received a Ph. B (Bachelor of Philosophy) in 1889. He graduated from Hastings Law School in 1892, and was admitted to the bar that same year.

In 1891 while he was still in school, Henry was appointed a justice of the peace of Brooklyn then elected for a term beginning in January, 1893. He resigned that position in March to become Assistant District Attorney. He later served as Prosecuting Attorney, Chief Deputy District Attorney, and Deputy Attorney General of Alameda County.

Henry had been ill for some time with "marked symptoms of brain fever." He was hospitalized at Merritt hospital in April, 1920, suffering from hallucinations, including one that he was losing his eyesight. The staff carefully watched him, fearing he would take his own life. During a bath, he eluded an attendant, blocked the door, and drowned himself by thrusting his head into a bathtub. 2 The Melvins are buried in Mountain View Cemetery in plot 16. Henry's grave marker was placed in 1921 by the Elks club. 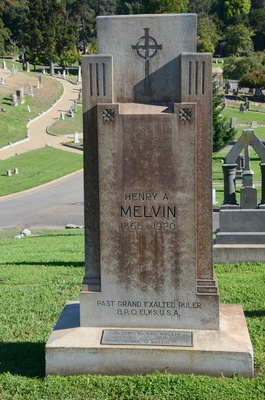 Henry A. Melvin grave
photo CC-A from Our Oakland 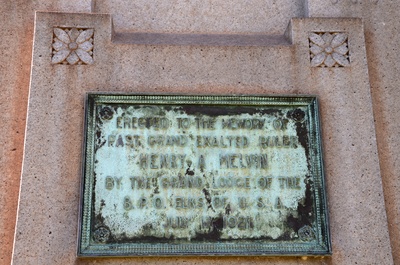