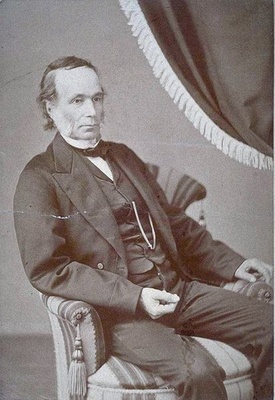 Cabinet Card of Henry Durant by Wm. B. Ingersoll via CalisphereRev. Henry Durant (1802–January 22, 1875) was the 16th Mayor of Oakland (1873–January 22, 1875). According to his obituary, he was so popular that “many of his political opponents cheerfully cast their votes for his re-election.” 5 He served on the City Council in 1870, as the President of the Council. Durant was a Republican.2 He is probably best remembered as one of the founders the University of California.

Durant was born in Massachusetts and attended Yale University. Before coming to Oakland, he was a pastor and then involved in furniture making; from 1849 to 1853 he served as the headmaster of The Dummer Academy in Byfield, Mass (today known as The Governor's Academy). He arrived in California in 1853, where he founded a school at 5th and Broadway. This school eventually moved to Berkeley, became the College of California and eventually the University of California. Durant was the first president of the University of California (1870-1872). In the late 1850s he became less involved with education and more involved with real estate (along with the usual suspects: James Leonard, Samuel Merritt, Orrin Simmons, Horace Carpentier, etc.) and ended up owning quite a bit of land.3

Durant served on the Board of Commissioners for the Police Department in 1872 or 1873 and was the President of the Board of Equalization the same year.1 He was a member of the Oakland Board of Education from 1853–58. He also presided over a short-lived committee looking into the creation of a humane society, and was a trustee of the Independent Presbyterian Church.4

Durant died while in office and is buried in Mountain View Cemetery in the Durant family grave in plot 9. In addition to a grave marker, there is also a special marker commemorating his role in founding the University of California. 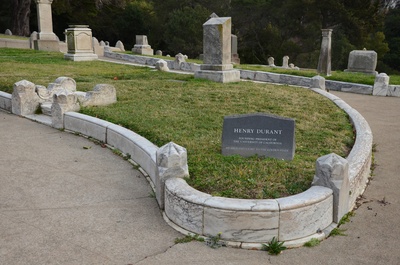