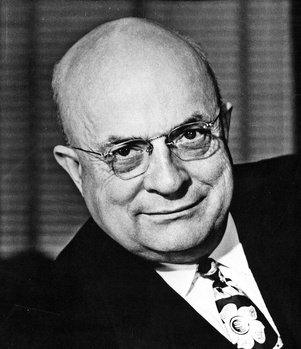 Henry J. Kaiser (May 9, 1882 – August 24, 1967) was an American industrialist known for wartime shipbuilding, the manufacture of cement/concrete, steel, and aluminum, and the creation of Kaiser Permanente, California’s largest non-profit health plan.

His first big bold move was to buck the then-traditional wisdom that quality building materials had be shipped here from overseas or by train from the east coast. He saw plenty of perfectly good locally available sand and gravel, which led to his securing the lucrative contract for Hoover Dam by underbidding the other contractors. That was in the early 1930s. Once the ball was rolling, he diversified into shipbuilding during WWII, getting into steel and aluminum, and later, cars and healthcare.

Kaiser's life was the subject of a 2004 exhibit at the Oakland Museum of California.

From 1925 through the mid-1940s, the Kaisers lived in the Kaiser House, which still stands at the corner of Haddon Road and Hillgirt Circle, in Oakland's Cleveland Heights and Haddon Hills neighborhoods. Franklin Delano Roosevelt apparently stayed there when visiting Kaiser during World War II.

Kaiser moved to a 16,000 square foot mansion in Lafayette in the mid-1940s, and later moved to Hawaii.

Not to be confused with his son Henry J. Kaiser, Jr. or his grandson, Henry Kaiser.