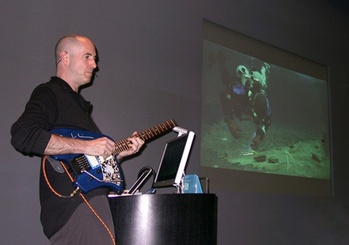 Oakland native Henry Kaiser (Sept. 19, 1952) is an accomplished American composer and guitarist who has been playing throughout the East Bay and San Francisco for decades.

In addition to his extensive musical career, Kaiser received an Academy Award nomination for his work as the producer for Werner Herzog's film “Encounters At The End Of The World” on which he was also the underwater camera and soundtrack composer.

The 2005 Grammy Award winner for Best Traditional Folk Album was awarded to Beautiful Dreamer - The Songs of Stephen Foster on which Henry Kaiser was one of the artists - on the album Kaiser played "Autumn Waltz."

Another passion of Kaiser's is his secondary career as a research diver and underwater cinematographer. 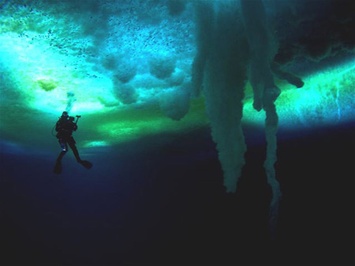 Henry Kaiser is the grandson of industrialist Henry J. Kaiser, though contrary to mistaken urban myths, Henry Kaiser did not inherit the family fortune, but has supported himself working in the music industry.

BTW, Henry Kaiser is playing with Michael Manring, Gautam Tejas Ganeshan and Vinny Golia at Yoshi's Oakland on Wednesday, March 6th.  According to Yoshi's "Grammy winner Henry Kaiser is widely recognized as one of the most creative and innovative guitarists, improvisers, and producers in the fields of rock, jazz and experimental music, and is one of the most extensively recorded as well, having appeared on more than 225 different albums and contributed to countless television and film soundtracks. A restless collaborator who constantly seeks the most diverse contexts for his music, Henry performs frequently throughout the USA, Canada, Europe, and Japan. Along with Davey Williams and Eugene Chadbourne, he is considered one of the "three founding fathers of American free improvisational guitar" 1