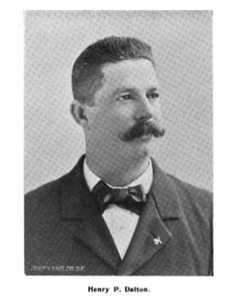 Henry P. Dalton (1860-?) served on the City Council (party affiliation at that time unknown) in 1893 as a representative from the First Ward. In 1894, while still on City Council, he was elected as Alameda County Assessor and served until 1899.2 Born in Tuolumne County, he was the founder (?) of Henry Dalton & Sons, which manufactured agricultural tools and machinery in Oakland. In 1894 he was elected County Assessor in Alameda as an Independent. His salary for this position was $14,000. According to one account, "his equity consisted in lowering the assessment on residence property and raising it on property of 'profits and income,'" ie: lowering property taxes and raising income tax.1

Dalton lived at 1454 8th Street in what is now known as the Samm/Dalton/Cooper Mansion.2