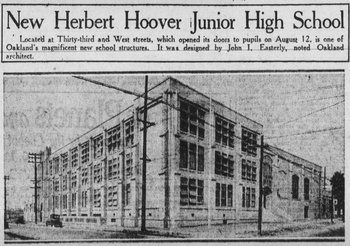 Herbert Hoover Junior High School (1929–1974) was located at 3263 West Street. The school's cornerstone was laid on March 4, 1929, the same date as President Hoover's inauguration as the nation's 31st president. It was designed by designed by John I. Easterly. 1

The school opened for the 1929-30 school year, with official dedication events for the school held during American Book Week, November 11-17, 1929. The school was demolished in 1974, to be replaced with a more earthquake-safe lower school.

Herbert Hoover Junior High occupied a portion of the site of the current Hoover Elementary. The Hoover Elementary campus now occupies the entire block between Brockhurst, Market, 33rd and West, with all of the buildings on the west (Market St.) end of the block. Hoover Jr. High’s buildings were on the east (West St.) side of the block — and there was a row of houses along Market Street and some other vacant lots where many of the current elementary school's buildings are located. 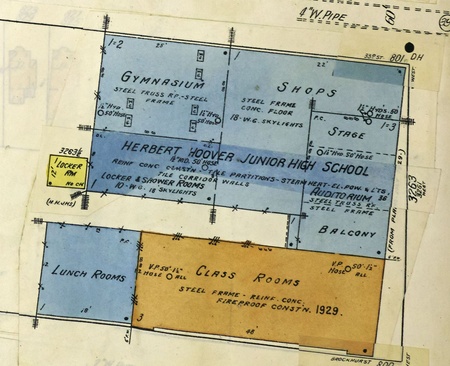