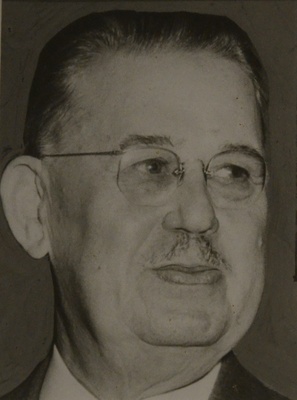 Born in Stafford County, Virginia, the son of a local farmer. Beach married Edith Suddarth (Beach) of Charlottesville, Virginia in 1900 and together they traveled to Oakland in 1905. There he established the first motion picture theater in Oakland, as well as several other of the city's neighborhood movie theaters. The first theater, which was in a former grocery store eventually lead to Beach amassing a fortune as a businessman. One source states that Beach retired from active business in 1931, whereas his obituary 2 lists 1946 as the end of his business career.

They had two daughters, Thelma Suddarth and Dorothy Suddarth. The 1940 census lists them as step-children? [ Q: They seem too young to be Hebert or Edith's daughters. And Herbert's obituary makes no mention of them. ]

Edith's sister Viola Suddarth lived with the Beach family. In 1910, she was working as a cashier at Idora Park. The 1920 and 1930 censuses list her as a cashier at a theater.

In 1931 Beach was instrumental in the formation of the council-manager form of municipal government.

Edith was chair of the Oakland Forum; both Mr. and Mrs. Beach were in charge of the Forum in October 1938. 1

Beach served three terms at mayor; during his time in office he announced policies with the inauguration of $15,754,000 in public improvements, including five municipal swimming pools, financed by bond issues approved by voters in May 1945. 4

On December 3, 1946 Oakland was hit with a general strike which lead to the Oakland City Council declaring a state of emergency, and placing the police and fire departments under the control of Mayor Beach. Early indications were that Mayor Beach was contemplating a 'get tough' approach to the strike. "An aroused mayor declared 'the city of Oakland is not going back to the jungle' and demanded drastic emergency powers to cope with the expanding mass protest walkout of organized labor which had kept the metropolitan area of 1 million people tied up. As Mayor Beach summoned the City Council to act because "no community can exist in anarchy," the AFL unions called for an even greater show of strength. 3

"The huge walkout, protesting a police protected delivery of merchandise through picket lines to two struck department stores, has: Stopped all public transportation; halted commuter service across the eight mile long San Francisco Oakland Bay Bridge, thus jam packed it with privately owned automobiles carrying more than 70,000 persons; Closed a a huge segment of East Bay industries; pulled AFL sailors off merchant ships; forced suspension of newspapers, including one which hadn't missed an edition since 1874; filled the streets with demonstrators, at times resulting in fisticuffs and manhandlings in which at least nine persons, three newspaper representative, were slightly injured. Spokesmen of the AFL and the city appealed by radio and press statement for public support." 3

Mayor Beach called the walkout "a physical assault" upon the rights of people to obtain food and newspapers and to travel by public conveyance. After assuring labor leaders he supported organization and collective bargaining, he charged that their unions were "doing wrong when they, for a minor provocation, are attempting to strike the whole city prostrate." 3

"Although Mayor Herbert Beach publicly condemned the Strike and promised to take control of events, in realty both the mayor and the city council abdicated what little authority they had; by one report neither the mayor nor the council was even given any advance notice of the police action on Sunday. Union representatives met instead with the city manager at the Athens Athletic Club, along with a "citizen's committee" composed largely of the same men present at the previous meeting in the district attorney's office." 5

Herbert L. Beach died in Oakland on August 30, 1959 at the age of 83, after taking ill in April of that same year. 2 Beach is buried in Mountain View Cemetery. 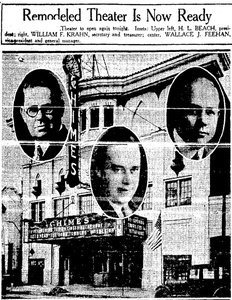 Beach & Krahn constructed the Lorin Theatre in Berkeley in 1914, and the Chimes Theatre in 1917.