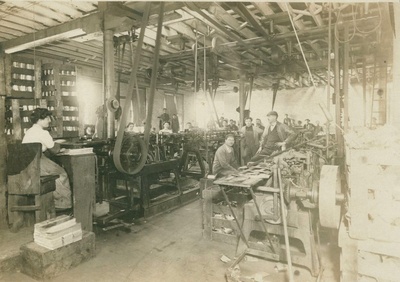 The Hickmott Canning Company (1890-c.1930+) was a canning business based in Oakland and with canneries elsewhere. A young Jack London worked at the cannery at 1st and Filbert stuffing pickles into jars for 10¢ an hour, 12-18 hours a day. The company was started by Robert Hickmott in 1890.

The company canned a variety of fruits and vegetables, but was best known for peaches and especially asparagus.

Part of the business was sold by Robert Hickmott in 1899, and was said to be valued at $65,000, and the company (including another cannery in Yolo county) was doing $250,000 a year in business. 1 By 1900, the canning business (still under the Hickmott name) was expanding. In November they leased a building at 2nd and Webster, and transferred can-making machinery from a plant in Bouldin Island. 2 The Hickmott Canning Company was also known as Hickmott Foods, and had a cannery in Antioch.3

In 1918, the Hickmott company filed various trademarks for its canned asparagus, including "Orwood", "Golden Crown" and "Santa Cruz". They were apparently using "El Capitan" since 1892. 4 The trademark for "El Capitan" was renewed in 1972 and expired in 1993, so the company may have survived in some form into more recent times.