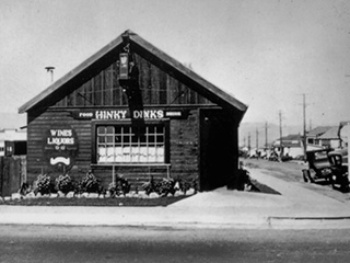 Hinky Dink's restaurant and bar was opened on the corner of 65th Street and San Pablo Avenue by Victor Jules Bergeron, Jr. (December 10, 1902–October 11, 1984) on November 17, 1934. With an increasing Polynesian menu and interior decorations Bergeron changed the name to Trader Vic's.

Franchises in other cities followed the successful first restaurant, starting in 1940, and the original Oakland restaurant relocated to Emeryville in 1972.

As recounted by Trader Vic history the Mai Tai was invented by Bergeron in 1944 when he mixed Jamaican rum, lime juice, a few dashes each of orange curaco syrup, French orgeat and rock candy syrup. He served this drink to his two friends from Tahiti, who was there that night, and after one sip they exclaimed “Mai Tai – Roa Ae.” In Tahitian this means “Out of This World – The Best.” The new drink became known as Mai Tai.1

Of the two the Queen palm trees in the sidewalk shown in the above photos, as of June. 2022, one is still there. The other was felled by the City of Oakland public works department on April 9. 2019 after two public requests to have it removed due to a loss of foliage.  The stump was saved and turned into The Palm Tiki of Trader Vics and was carved by renowned designer, Ignacio “Notch” Gonzalez in 2021.

In the early 1930s, Vic's brother, Narcisse Bergeron, ran a gas station across San Pablo from where Hinky Dink's was built, so Vic was probably familiar with the area.

I haven't seen an explanation of the name Hinky Dink's, but it's possible it was chosen for colorful Chicago political boss, Michael "Hinky Dink" Kenna. Among other things, he ran saloon in Chicago. It's also possible it was a play on rinky-dink, meaning inconsequential. Dictionary.com includes this note in the definition of rinky-dink:

...[compare] this chorus from the "Yale Literary Magazine," Feb. 1896:
Rinky dinky, rinky dink,
Stand him up for another drink.

Columnist Herb Caen speculated that the name Hinky Dinks came from the World War I song “about that Mademoiselle from Amentiérs (‘Hinky-Dinky Parlay-Voo’).” 2