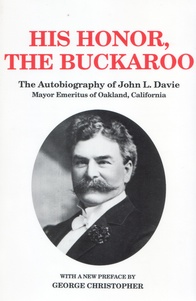 His Honor, the Buckaroo is a fancifully-written autobiography of John L. Davie, Oakland’s longest-serving and most popular mayor. Originally serialized in Summer 1931 by the Oakland Post-Enquirer newspaper under the title My Own Story, it was later republished in book form. While some of the prevailing views at the time about people of color lead to a few offensive tales in his story, the rest makes for a fun if not entirely believable read.

The story’s main events are all verifiable: Davie’s 1850 birth in upstate New York; his work as a mule driver on the Erie Canal; journey to Chicago (and exodus after the Great Fire of 1871); working as a bouncer, butcher, opera singer and actor in San Francisco; owning a ranch near what is now Lassen National Park; opening a coal business in Oakland, and an adjacent bookstore; battling railroad giant the Central Pacific; and being elected mayor of Oakland five times, usually by large margins. He met and knew numerous people famous in Oakland and beyond, including Ina Coolbrith, Joaquin Miller, Jack London, Rev. John Knox McLean, Phoebe Apperson Hearst and William Randolph Hearst, John Heinold, and no small number of politicians.

While some of the particular stories may be exaggerated, there is no doubt that Davie led an eventful life and did his best to live life to the fullest. Even if the stories are all exaggerations, he was still an intelligent, resourceful, brave, and sometimes downright lucky man – and not one to shy away from fisticuffs, when that suited the moment.

Numerous civic accomplishments during the Davie years included the creation of EBMUD and the Port of Oakland, the opening of natural history and fine arts museums, the building of Skyline Boulevard, construction of the Posey Tube, construction of Oakland International Airport, and more.

At the end of the book he relates a number of things he wished he’d been able to accomplish, including turning Lake Merritt into an actual freshwater lake (!) via dams and pumps. He also points out numerous cases where he’d suggested the city buy land that they were now having to buy for more money.