Horace M. Wilds (1868?-1902) was a well-known African-American baseball player, and the eldest son of John A. Wilds. As with other colored baseball players, he was unable to gain a position with a major league team because of his color.3  The Oakland Tribune apparently referred to him as the "colored beauty." 3 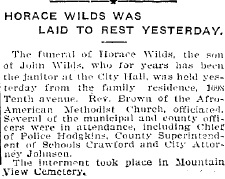 Oakland Tribune, February 10, 1902
(fair use) 2
He lived with his family at 1008 Tenth Avenue, which had previously been the Brooklyn Colored School. He died in 1902 due to the lingering effects of a baseball injury that had occurred six years previously.1 His funeral was attended by several prominent City and County officials, presumably due to the fact that he was John Wilds' son.2