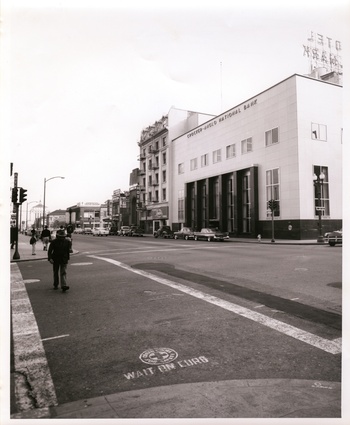 The Hotel St. George was located at 371-75 Thirteenth Street, Oakland, California, and is currently the site of the Clarion Hotel. The Colonial Revival - Mansard hotel building was designed by Walter J. Mathews, who was the builder as well from 1906-1908. It was constructed in part to house the Winedale Company and initially completed in 1907.

An August 1909 classified for the St. George describes it as "just opened", 2 though it may have been operating under a different name before that. Ironically, a fire had destroyed the St. George Hotel in San Francisco a few months before.

In 1911, Peter Andrews, a teamster from Contra Costa, fell to his death in the light well. His death was determined to be accidental. 3

This is a six story mansard roofed brick masonry hotel and store building with simple Classical ornamentation, on an interior lot. The facade is four bays wide, in a three part vertical composition with a commercial ground floor base, a three story, stucco surfaced shaft, a one story capital, and a one story attic with a sheet metal mansard roof with four pedimented dormers. Windows are set singly in slightly recessed molded bays. A molded belt course and modillion block cornice articulate the capital. The ground floor storefront has been altered; wood clerestory windows remain on the left side above the entry and lobby window of the residential hotel.

This building was developed by capitalist and wine merchant Charles Jurgens as a "lodging house," perhaps originally for 1906 earthquake refugees, and also housed Jurgen's wine business headquarters. The mansard top story, a rarity in Oakland, appears to have been added in 1907-1908. It is an unusual design by Oakland's prolific and influential early architect Walter J. Mathews. 1

This historic building is #38 on the list of District Contributors for the Downtown Oakland Historic District Registration Form.