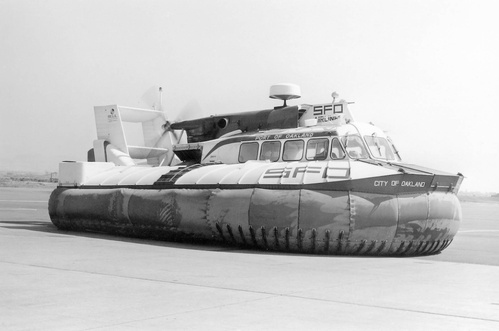 There was a hovercraft service between Oakland International Airport and SFO, operated by SFO Helicopter Airlines during the 1960s. They also operated the helicopter service that made use of the heliport on top of the ALCO Garage.

The Port of Oakland sought approvals in 1964, 1 and by 1965 they were doing testing on the Bay. 2 They even did a demonstration on Lake Merritt. 7 The first official trip with passengers was August 10, 1965. One of the hovercraft carrying Mayor Houlihan worked beautifully, but the other had mechanical problems. 8

Each of the SR.N5 hovercrafts built in Britain carried 14 passengers, operating from August 1965 to August 1966. There was also a "hoverport" in San Francisco at Pier 50-B.

But the program depended on a federal subsidy. 3 When that wasn't available, the hovercrafts were grounded. 4 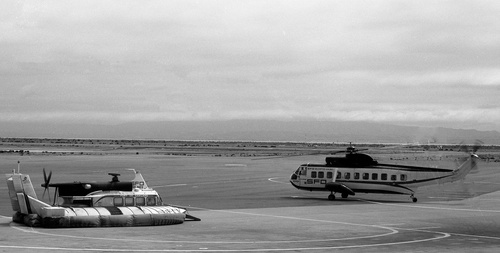 During high-speed testing in 1965, one of the hovercrafts flipped near Alameda's South Shore. The 4 people on board were quickly rescued. 5