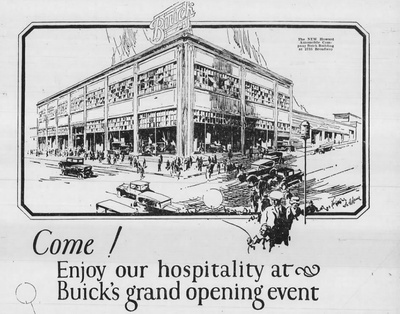 The Howard Automobile – Dahl Chevrolet Showroom is a building at the corner of Broadway and 27th Street which was built in 1924 for the Howard Automobile Company as a Buick showroom. When the building opened, the address was 2735 Broadway, but it is also sometimes identified as 2735 Webster Street. It was designed by architect Benjamin Geer McDougall, and C. S. Howard, president of the company. 1 Later users included Dahl Chevrolet and other dealers, and until 2019, it was occupied by Autocom Nissan.

When constructed, the building was in the middle of the block between 28th Street and 26th Street, since 27th Street between Telegraph Avenue and Broadway was not constructed until 1956. The lot next door was occupied by the Curtis Forrest House, and the south wall of the building is seen in a 1942 Dorothea Lange photograph of the house seen on that page. The original configuration of the property (except for the demolition of the Forrest House) is shown in this excerpt from the 1951 Sanborn map for the area. 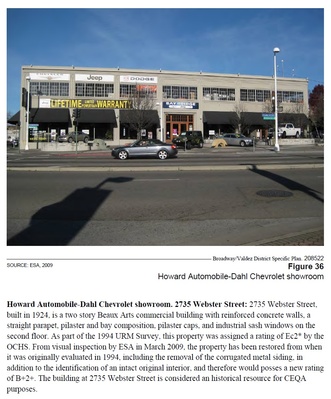