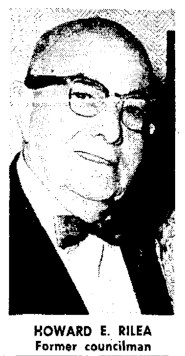 Howard Eliot Rilea (September 21, 1884 – October 17, 1968) was a long-time member of the Oakland city council representing district 3. For most of his career, he was a railroad engineer. So it's no surprise he was the force behind the creation of the Harrison Railroad Park.

Rilea's father and brothers were also railroad men; his father, Ira Moore Rilea was a conductor; his brothers, Robert E. Rilea and Ira Rilea, Jr. were fireman; his brothers Walter I. Rilea and Eugene F. Rilea were brakemen. 3 Rilea's career began at age 17 in 1902, when he worked for Southern Pacific. He would ride out by bicycle from the roundhouse to notify engineers and and firemen that it was their turn to take a locomotive out. He moved up the ladder, and in 1912 became an engineer, a position he held until he retired from the railroad in 1948. 1

Rilea served on council from 1950 to 1967. He faced Raymond Eng three times, and defeated him twice. He was known as a staunch opponent of urban renewal and public housing. 2,6,10

In 1957, Rilea arranged to have the Southern Pacific give the city a locomotive, Engine 2471 and its tender, for display. The problem immediately became: where to put it? Rilea wanted to put it in Jack London Square. Fellow council member Frank Youell thought it an eyesore, "There's nothing beautiful about a locomotive." Rilea replied, "That locomotive is a lot more beautiful than a hearse." (Youell was a mortician). 7 But a year later, a location still hadn't been found. 8 Finally, in 1960, Engine 2467 became the first railroad equipment moved into Harrison Railroad Park.

There was also apparently a locomotive outside Peralta Playland, Engine 233, a gift from the California-Nevada Railroad Historical Society in 1951. 5

In July, 1968, Rilea had a ruptured artery in his stomach. He survived that, but in October, 1968, died during surgery to repair it. 2

In 1976, EBMUD built the Rilea Reservoir, named in his honor. 9 Note that nearby Rilea Way probably wasn't named for him, as the name appears as far back as 1950, when Rilea had just been elected. 11 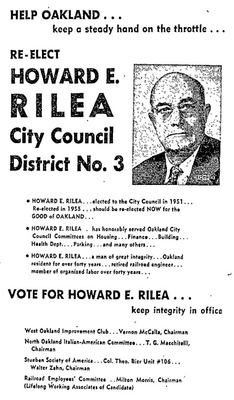