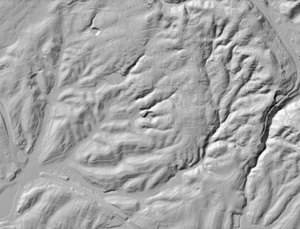 Digital elevation model of Indian Gulch. Wildwood Creek valley in the middle, Pleasant Valley Creek valley at left. cc-andrewIndian Gulch is a stream valley extending from the eastern tip of Lake Merritt to headwaters in and above Piedmont. Its stream is known as either Indian Gulch Creek or Trestle Glen Creek (after the Trestle Glen neighborhood).

The Peralta ranchers gave it the name Cañada de las Inditas after the major Ohlone (Huchiun) village that had formerly existed, before the Spanish land clearance in the 1790s, near the present-day intersection of Lakeshore and Trestle Glen Road. The stream in the glen served as the boundary between the ranchos of Vicente Peralta and Antonio Maria Peralta. The English name "Indian Gulch" later appeared in the 1852 act establishing the borders of Brooklyn Township. The creek is now mostly underground.

In the late 1800s parts of the valley were farmed for hay, it being too far out of town to draw interest from developers. In the 1880s a factory operated in the valley that processed eucalyptus leaves to produce an antiscaling compound for use in boilers. After Trestle Glen Park opened in 1893, the first of several proposals over the next 30 years was floated in 1896 to turn large parts of the valley into city parkland. These lands included Trestle Glen Park and most of the north side of the creek, but the proposals grew smaller each time. Mayor Frank K Mott was involved in a plan to keep Trestle Glen as part of a greenbelt connecting Dimond Canyon, Mountain View Cemetery and Lakeside Park. Mayor John L Davie wasn't into the plan, though, and the area was developed starting in the late 1910s.