Reverend Isaac H. Brayton (November 29, 1821–April 12, 1869) was a Presbyterian minister who was an early supporter of Rev. Henry Durant’s new Contra Costa Academy (later the College of California, then the University of California). He served as the second principal of the school, and part-time instructor of English, Rhetoric, and Letters. 1

Brayton came into some money in February, 1864 when he sold 209 acres to the trustees of the newly created Mountain View Cemetery for $13,000 2. This helped him to purchase the land and buildings for the College of California. Brayton Hall, which later became the Dietz Opera House, was named for him.

Shortly after Isaac's death in 1869, the University of California traded 82 acres on Prospect Avenue in Berkeley (above the present-day campus) for Mary's land in Oakland where the campus stood.

Mary moved to Italy c.1881, and she died there in 1884. She is buried in Amalfi, Italy. 4 There was some confusion over Mary's will and estate. Before she left for Italy, she left a will with E. C. Sessions of the Oakland Bank of Savings. Shortly before she died, Mary wrote him and asked him to destroy the will. Then after Mary's death, Sessions was going through old papers and found an earlier will. Further complicating things was that her son, Henry, died in the mean time (also in Italy), leaving Mary's sister Phoebe Watkins of San Francisco, her brother in New Jersey, and other relatives as her heirs. She also left $5,000 to her nurse, Annie Adair. An article in the Daily Alta California includes this gem of a sentence: "The provisions of the will now proved are quite complicated, and the most important of them has been rendered nugatory by the death since of the testatrix' son, Henry Brayton, who was the principal devisee." 5 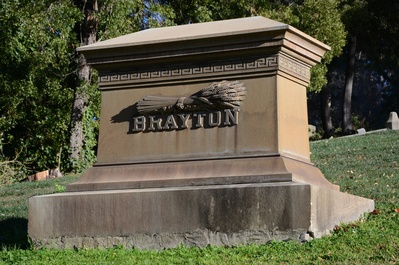