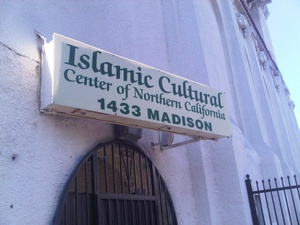 The name of this place hints that it's more than a place of prayer. In fact, their focus is Islamic Art, Culture and Education. It's one of the largest physical masjid buildings in Northern California.

They were the first and may still be the only Islamic member of the Oakland Coalition of Congregations.

Originally this building was built by the Freemasons as a Masonic Temple for the Oakland Scottish Rite. That architecture has pretty much been retained minus any Christian or other previous religious symbolism, although a stained glass window is visible from the outside.

The elders in the Masjid administration and congregation are Persian speakers who follow the Jaffari (Shia) School of Thought in Islam.

The administration has youth programming in English, and by youth, they mean 8 - 12 years of age and early teens.

Regular events are scheduled for non-Muslims to learn about Islamic Culture. A large banquet hall has a stage and it is often used for diverse programs and events including musical performances, film screenings, lectures and talks.  There is also a cafe and library.

There is plenty of prayer space in the main hall upstairs with plenty of spill over space downstairs and in the hallways. Upwards of 500 people can comfortably pray at one time.

Women are able to pray in the main prayer hall without any barrier in-between them and the men. Women are also on Board of Directors and Board of Trustees.

The on-site parking lot fills up pretty quick so plan on getting there early if you want a spot. 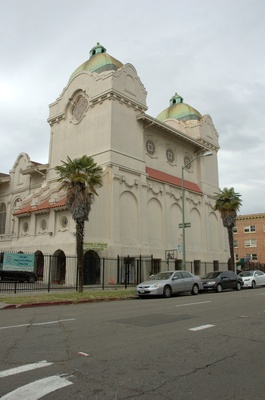