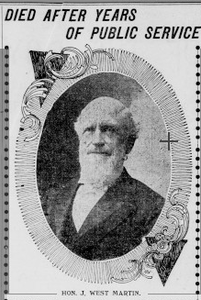 Martin was born in Maryland in 1822. He moved to Memphis, Tennessee and came to California in 1853. He first moved to Livermore and raised cattle and horses.3 Martin came to Oakland in 1865.

Martin worked at Union Savings Bank and was elected president in 1876. He remained president until his death. He was also a director and vice-president of Union National Bank.10 Along with F.K. Shattuck, Joseph S. Emery and John W. Dwinelle, he was one of the founders of the Amador Water Company. He was also part of a group of founders of the Home Gas Light Company, which in 1871 got permission from the City Council to guild a gas manufacturing plant and lay lines throughout the city.1 He was the president of the Oakland Gas Light Company. He was known as a capitalist at the time and was a millionaire. 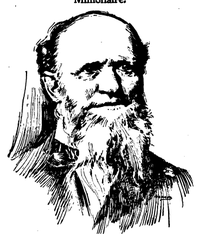 J. West Martin8 He lived at 56 7th Street and later 720 14th Street. Martin married Mrs Jane Carneal. He had a surviving son, Shelby Foote Martin. Shelby had a "contract marriage" to Valeria Hickethier that was the talk of Oakland for years. Apparently a notary signed a wedding contract at a dinner with 3 other witnesses, but they weren't actually intending to wed. Mrs Martin nee Hickethier claimed she was rightfully married, while Shelby wanted out.7

Another son, Richard Winter Martin, overdosed on laudanum at the Livermore ranch in 1897. He had been taking it to calm "overwrought nerves," as well as drinking. He had a "fondness for drinking and the gay life." The death was ruled accidental. Dick was 30 years old.6

He served as president of the Board of Public Works from 1889-1892.5 Martin was a Democrat.

Martin was a Regent at UC Berkeley from 1868 until 1899, a few months before his death. He served at the Constitutional Convention for the University in 1878-1879.4

Martin's thoughts on the Charter. j west martin on the charter.pdf

Martin died of chronic bronchitis after a long illness.9 He is buried in Mountain View Cemetery.