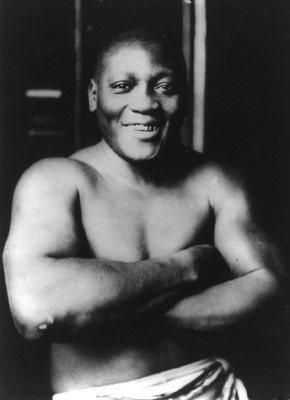 His fight in 1910 against formerly retired champion James Jeffries was called "The Fight of a Century". The white media, eager for a "Great White Hope", found a champion for their racial pride in James Jeffries. Jack London is quoted as saying, "Jim Jeffries must emerge from his alfalfa farm and remove the golden smile from Jack Johnson's face." 2

In 1907 the San Francisco Chronicle reported that Johnson would be marrying a white woman, an Australian named Lola Toy.4

[ I was told that some past newsletter from the history room was all about Jack, and he apparently liked to drive around Oakland in big cars. He trained in a gym off San Pablo Ave. - Gene ] [this was probably Link Dennis's.]

According to a newspaper article from 1911, Johnson owed a debt of $25.25 to Oakland clothing merchant James T. Moran, and references Johnson having trained at the Reliance Club. 3