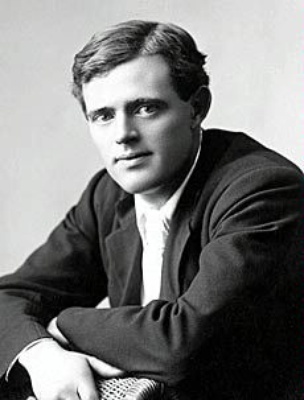 John Griffith “Jack” London (born John Griffith Chaney, January 12, 1876 – November 22, 1916) was an American author, journalist, and social activist. He was a pioneer in the then-burgeoning world of commercial magazine fiction and one of the first fiction writers to obtain worldwide celebrity and a large fortune from his fiction alone. Best remembered as the author of The Call of the Wild and White Fang (both set in the Klondike Gold Rush) as well as the short stories “To Build a Fire”, “An Odyssey of the North”, and “Love of Life”, he also wrote of the South Pacific in such stories as “The Pearls of Parlay” and “The Heathen”, and of the San Francisco Bay area in The Sea Wolf.

”Johnny” was born to Flora Wellman in San Francisco. William Chaney was likely his biological father, though he denied it in later years. By her account, Chaney demanded Flora have an abortion; when she refused he disclaimed responsibility for the child. Flora shot herself, and though she wasn’t badly wounded, she was temporarily deranged. Flora Wellman married John London late in 1876.

London was raised in Oakland, primarily by Jennie Prentiss, who was born into slavery. She was like a mother to him, and he remained close to her the rest of his life, remembering her in his will.

Jack went to the Oakland Public Library in 1886, where he met librarian (and later poet laureate) Ina Coolbrith. He spent much of his childhood in the Oakland waterfront area now known as Jack London Square including many hours at Heinold’s First and Last Chance Saloon. Jack attended Cole Grammar School in West Oakland starting in 1887, He graduated from 8th grade in 1891, though he was apparently embarrassed by his shabby suit and didn’t attend the ceremony.

In 1892, Jack went to work at Hickmott’s Cannery near 1st and Filbert, working 12-18 hour days in noisy, dangerous conditions. This doubtless helped shape his views of workers rights. To escape this, he borrowed $300 from Jennie Prentiss and bought the sloop Razzle-Dazzle.

Although the household was in need of money, Jack’s mother encouraged him to keep writing. In 1893 at age 17, he won a $25 prize for an essay he wrote for the San Francisco Call, “A Typhoon Off the Coast of Japan”. He wrote about his own experience of a typhoon, aboard the sealing schooner Sophie Sutherland. 4

Jack London lived at 1914 Foothill Blvd. in an 1890 Queen Anne-style row house. While living in the rented house with his mother from 1898-1900, he wrote his first book, The Son of The Wolf, a collection of stories from the Klondike Gold Rush. London had spent 16 hard months in the gold country, but returned with $4.50 in his pocket.2 Clearly he had gathered a lot of material for his writing, though.

London was a passionate advocate of unionization, socialism, and the rights of workers and wrote several powerful works dealing with these topics, such as his dystopian novel The Iron Heel, his non-fiction exposé The People of the Abyss, and The War of the Classes. In 1901, he ran for Mayor of Oakland on the Socialist ticket and received 247 votes. He ran again in 1905 (also on the Socialist ticket), and garnered 841 votes. 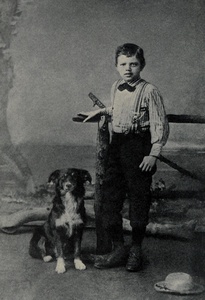 Jack London in 1885, age 9 with his dog Rollo. photo from Wikimedia Commons 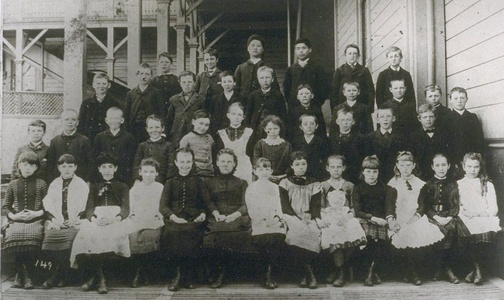 Jack London, with bow tie, in the second row on the right, student at Cole School, Oakland, California (1887) 3 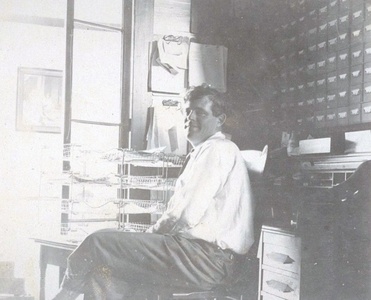 Today, there is part of a cabin he lived in during his time in the Yukon in the plaza right outside the saloon. Additionally, bronze wolf tracks in the sidewalk in different areas of Jack London Square correlate to historic locations and lead the casual walker on a Jack London History Walk. The walk starts at Heinold’s First and Last Chance Saloon and ends at the Presidential Yacht Potomac. Members of the public can apparently purchase individual bronze wolf tracks. For more info about the walk and the purchasing, check out the official Jack London Square site or call (510) 645-9292. There is also a bronze statue of Jack London created by artist Cedric Wentworth

Jack London wrote an account of the 1906 San Francisco Earthquake & Fire for Collier’s which was published on May 5, 1906: The Story of An Eyewitness.

”I would rather be a superb meteor, every atom of me in magnificent glow, than a sleepy and permanent planet. The proper function of man is to live, not to exist. I shall not waste my days trying to prolong them. I shall use my time.” —Tales of Adventure (NB: He may or may not have actually said this, but he certainly lived his life that way) 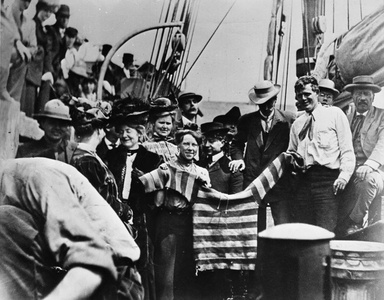 Jack London and his wife, Charmian, holding out a college sweater which was flown as a farewell gesture on the day he sailed from the foot of Broadway for his South Pacific adventure aboard the “Snark” (1907) 3 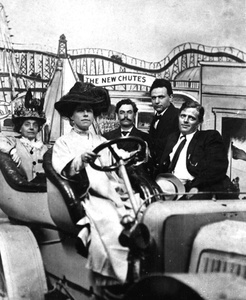 Jack and Charmian London at Idora Park, with author’s mother, Flora Wellman in rear with two unidentifed men. The photo was made in the photo concession at Idora Park where customers posed in front of painted sets, this set depicts the roller coaster at the amusement park. (circa 1910) 3 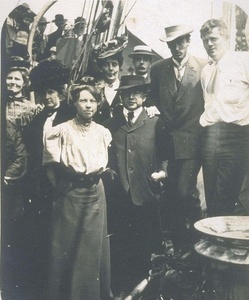