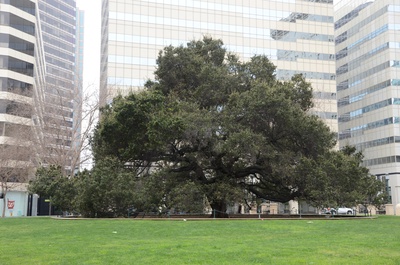 The Frank Ogawa Plaza oak tree, sometimes known as The Jack London Oak, is a city landmark. The Coast Live Oak (Quercus agrifolia) was transplanted and dedicated in 1917, a few months after Jack London died. Legend has it that it was planted by his widow, Charmian London, but there's no evidence in the newspapers of the time that she was present. She and London's sister Eliza London Shepard did visit the oak tree in 1933, along with mayor John L. Davie (photo). 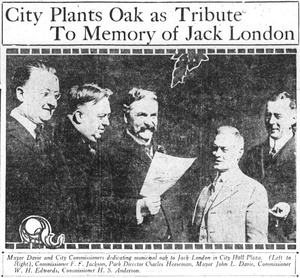 "A resolution of the Oakland city council, perpetuating the memory of Oakland's greatest author and dedicating the city's standard bearer oak to his name—Jack London.
"Proud his city that there came a lad who lived and grew to world's renown by striking chords that until his coming had remained unsung.
"Sad our city, that life for him, a narrow vale wherein he spoke and gave a radiance for all mankind; sad that his life was short, a sacrifice for experiences that remain aglow for you and me.
"Glad that we can confer this mite of honor by dedicating Oakland's standard bearing oak to him that grew with this city, that his sturdy sentinel may stand in memory and honor to Jack London."

The tree was 20 years old, and had been growing in Mosswood Park. It took 8 workmen four days to move the tree. There had been a tree in the location, but it had died several months before. 2 A brass plaque was to be placed on the tree. 3

O Oakland Oak.
The teargas you've breathed.
The chaos. The frenzies. The tank. The overwatering.
Keeping city hall company.
And all the staffers looking down.
And all the pedestrians looking up.
Remember Tully's?
Send Pizza Man my regards.
O Oakland Oak. 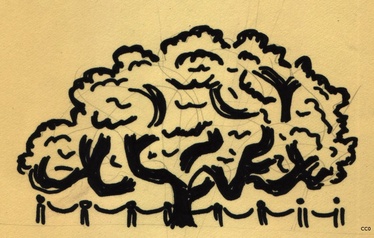 Made during Draw Oakland (CC0)

Following the Loma Prieta Earthquake in 1989, special attention was given to preserve the health of this important landmark. Many people, including community activists, city staff, the city manager, as well as the mayor and city council collaborated with a team led by architect Y.H. Lee to develop comprehensive plans to best protect the Jack London Oak. Barrie Coate, in the capacity of consulting arborist, and Oakland's arborist, Dr. Bob Raabe also assisted in the plans, which finally outlined several recommendations as to the best approach. Coate, the PGAdesign arborist came to the following conclusions after his examination:

“The interior of the tree had been thinned excessively in the past. . . . there is inadequate foliage in the interior of the canopy.” This inhibits an increase in the diameter of the main limbs and branches. The arborist’s report explained, “The result of the loss of foliage feeding the individual limbs in areas other than branch ends has been production of extremely long limbs with all of their weight at the ends, poor branch and limb taper.” 1

In July 1995 one of the major branches failed due to "poor branching structure and excessive end weight." When it fell, another branch was broken, causing an unsightly hole in the tree's canopy. The recommendation at that time was to fertilize the tree at the sub-surface level after reducing the load on the branches through end-weight thinning. Since that time, none of the major branches have been lost.

On January 28, 2017, 100 years after original dedication, the tree was rededicated and a new plaque to mark the tree was unveiled. This was organized by the Jack London Legacy Committee, and sponsored by the Alameda County Historical Society with the support of the Oakland Heritage Alliance. A second copy of the plaque was paid for by city of Oakland. 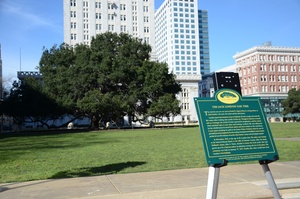 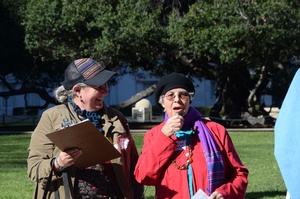 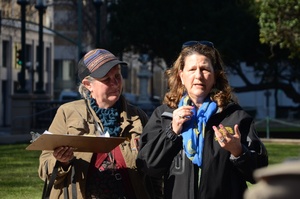