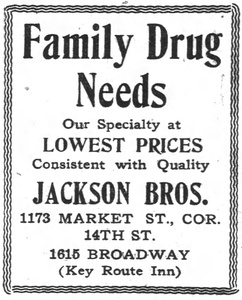 The branch in the Key Route Inn was apparently rather elegant:

Jackson Bros, who, for twenty-years, have been prominently identified with the drug trade of Oakland, are opening another new store at 22d and Broadway in the Key Route Hotel building. This hotel, recently opened, is the leading tourist hotel of Alameda County, and the location, from a drug standpoint, should be first class. The interior of the store will be finished in light oak, and will be fitted with crystal plate show cases, Tennessee marble base, mirror backed and nobby in every detail. A mezzo gallery will run the full length of the store, and there will be fifty feet of plate glass window on the Broadway side, with thirty feet of plate on the arcade. This store is tributary to the most fashionable district in Oakland and adjacent to Piedmont and Vernon Heights, and the management purpose making the store the coziest and most comfortable drug store in the West. A. large bay window in the corner is set apart as a cozy corner, fitted with leather window seats, a free telephone and supplied with all the latest magazines. • Here ladies can wait for their train, write their letters, or phone their friends. The idea is a new one in the West, and we bespeak for Jackson Bros. marked success. 4

In 1924 they opened another branch at 753 Grand Avenue (3405 Grand after renumbering), managed by W.T. Hyde who was formerly the manager of the Key Route Inn branch. 2