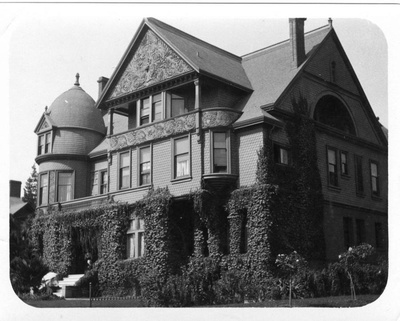 The Jackson-Lake Hospital, later known as the Civic Center Hospital, was a small hospital at 1537 Jackson St. in the Lakeside neighborhood. It opened as the new location for St. Anthony's Hospital in 1918 in the former Goodall mansion. In 1960 it was moved to 390 - 40th Street, and was in operation until 1977. 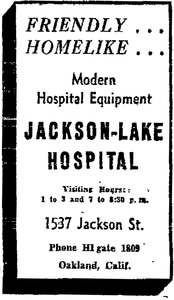 1939 adDr. Manuel M. Enos, David Williams, Joaquin A. Silveira, John Valladao and John J. Bettencourt filed articles of incorporation for St. Anthony's Hospital in 1904, 16 and the hospital opened at Brush and 9th. Bessie T Kellogg was the superintendent. The Portuguese in San Leandro says it was the first Portuguese hospital in America, and in addition to the above names, lists Alexandre Borges, Joao Balra, Jose D. Oliveira, and David Williams as forming the Portuguese Hospital Association. 17

A fire broke out in 1931, threatening some patients who were bedridden. Chief Lutkey sounded a general alarm, and all the patients were rescued. 15

In November, 1950, the hospital was sold to a group of osteopath doctors and renamed the Civic Center Hospital. 3 In 1954, it was granted non-profit status. 8

The hospital went bankrupt in 1977. The building was purchased by Pax Beale, who refurbished it and opened the California Surgery Center and Hospital, which specialized in care for athletes and runners in particular. 13

Other Stories and Connections

Orrilla Graves Boydston was the night superintendent at St. Anthony's for 10 years. 12

Robert Houchins was born in the hospital in 1928. 19 years later in 1947, he collapsed from a heart ailment while getting his marriage license. His marriage to Louise Schwatka was held in the hospital, with Dr. Enos and and the nurse who had delivered him in attendance at the bedside wedding. 6

In 1935, Dr. Clarence Foltz was an emergency surgeon for the hospital.

In 1953, the supervisor of nurses, Angela Muccia, was struck by a hit-and-run driver. She was brought to the hospital for treatment of a possible broken hip. 11

In c.1954-1955, Lida Hahn was the director of nursing services at the hospital and a member of the Soroptimist Club. 7

In 1960, Ronald Mena, Jr. was the first baby born in the new hospital, on the day it opened and they were moving patients from the old location. Ronald's parents weren't charged and were told "a first baby born on the first day a hospital opens means good luck." 9 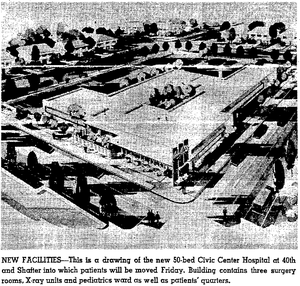 The Jackson St. location is now the Jackson Lake Apartments at 1533 Jackson. At the time, the 3-story, 192-unit to be constructed was one of the largest apartment buildings in Oakland. 4 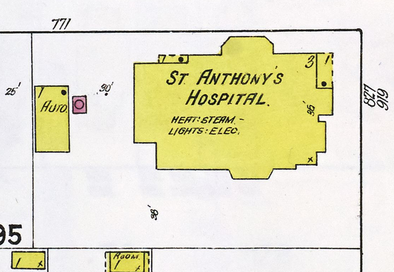 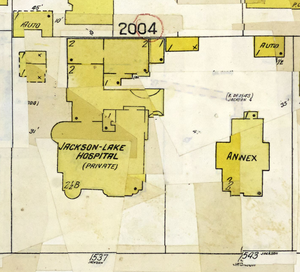