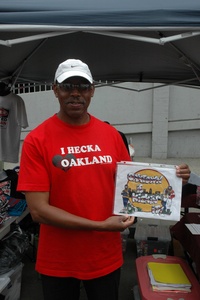 Long before there was Oaklandish and lOAKal, there was James Copes, aka 'Da Mayor of Eastmont Mall'.

Copes has been in the T-Shirt business since the 1980s and claims to have coined the term 'Oaktown'. He's also a proponent of the more polite "hecka" instead of "hella."

He owned two very popular stores, one on Lakeshore Avenue, the other in Eastmont Mall. Due to frequent burglaries in both locations (Lakeshore store was burgled 8 times and robbed once in one year) in the early 90s, Copes had to close down the business and become a recluse.

After a long hiatus in which Copes overcame a bout of depression and other medical conditions, he is now back and reviving his unique brand of Oakland T-Shirts. You can find him every Saturday and Sunday in front of the Sprint store on Lakeshore selling his t-shirts and chatting people up. Copes carries around with him a binder full of articles about his past as well as a Too Short platinum record which the artist dedicated to Copes.

Copes was also something of an athlete, and was prominent in the local tennis scene back in the 1970s. In 1977 there was a Jim Copes Celebrity Tennis Classic held at Laney College. 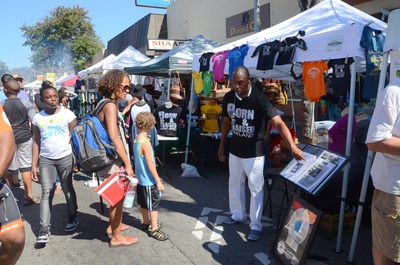