James A Johnson served part of one year on City Council in 1901. 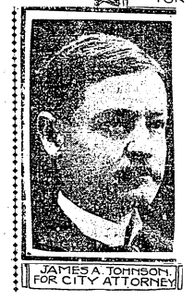 Johnson's nomination picture in 19012James Johnson was appointed to the City Council in January of 1901 after HD Rowe resigned. He served out the remainder of the term but ran for City Attorney, his primary position, again in 1901.  He appears to have served in City Attorney both before and after his short stint on Council as he served in the late 1880s, the 1890s and was reelected in 1901.3  By April 1903 Johnson was being called the "former City Attorney."9 It's not clear exactly when he started the gig but he was appointed by Mayor Chapman in 1891 and had already served two terms.8 (How long were the terms for City Attorney? Was he elected for the first or appointed?) (He was at least city attorney in 1887)

In 1895, possibly in his capacity as City Attorney, Johnson wrote a letter to the Board of Education that was published in the San Francisco Chronicle as it caused a lot of turmoil. He criticized the drawing teacher at Franklin Grammer for forcing the students to spend too much time on technical drawing. Boys and girls alike were wasting precious time on drawing shapes for things like wallpaper.6

In 1889 Johnson was sued for some property that had been deeded to him for legal services.5 In 1898 he found himself in the hot seat again when he accused of by a wronged dad advising a mother to abduct her a 13 year old child, but Johnson denied the claim, saying that he only told the mother to produce the son if she knew her whereabouts.4 Perhaps these were scandals or maybe this was just life as a prominent lawyer at the turn of the century.