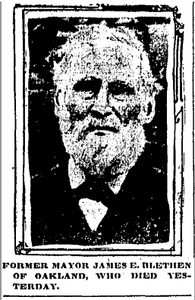 Having learned the trade of carpentry as a young man in Maine, Blethen worked as the ship's carpenter on the way to California. He started out as a miner, then worked as a carpenter in San Francisco until 1861. He then moved to a ranch (where?) until 1868. At that point, Blethen bought the Pioneer Planing Mills, located at the Northwest corner of Broadway and First..2 He was also partners with V. P. Terry in the firm of Blethen & Terry, which conducted business in doors, sashes and blinds. In 1891, he had a table making business which rented space at the East Oakland Planing Mills. It was destroyed when the mill burned down.

Blethen resided in Brooklyn Township, and his occupation was listed as farmer (source?). The 1887 Bishop's directory lists his residence as 568 East 11th.3

It appears that Blethen lost a lot of money at one point in the stock exchange. His brother, Charles A Blethen, was killed by a train in 1898 and the story of his death included the story of Charles' lost fortune. Apparently the Blethen brothers had owned the mills together and then lost big together. Charles was a millionaire before going bankrupt. James did not go bankrupt, but also lost big.4

Blethen was married twice: the first time to Lydia Fall. Before she died in 1867, they had six children. He then married Georgiatta W Adams (maybe an Edson Adams relative- listed as a daughter of an Oakland pioneer?) who died in 1900. They had three children: George W. Blethen, Mrs F. D. Doblier and Mrs George A Scott. (A genealogy of the Blethen family is available here.)

Blethen was a member of the Masons, Odd Fellows and the United Workmen.

Blethen died on June 23, 1909 and is buried at Mountain View Cemetery.