James Thomas ("J.T.") Moran (March 1848 – May 5, 1925) was the owner of a men's clothing business in Oakland, which sponsored the Greenhood and Morans baseball team. Moran was also the second owner of the historic Quinn House.

Moran's clothing business was on Broadway near 11th. Different directories and articles list different addresses, but all in the 1000 block of Broadway. A 1923 ad says they sold "everything a man wears (except shoes)." The business was in the newspaper of number of times, once because of damaged sustained because of a fire that started at a nearby paint store 1, and once because of J.T.'s creative security system. After a number of businesses in the area had been robbed, they started keeping a gas light burning. It was put forth that Moran was having a clerk sleep in the store at night, but someone recognized the "clerk" as one of the display dummies, and the truth came out. 2 J.T. was also noted in the paper for collecting an eight year-old debt from boxing champ Jack Johnson. 3 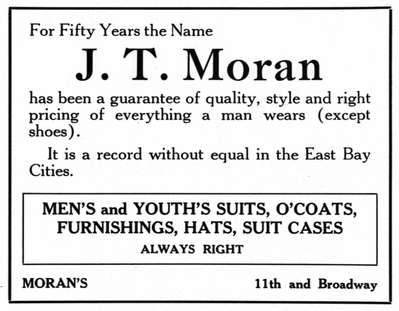 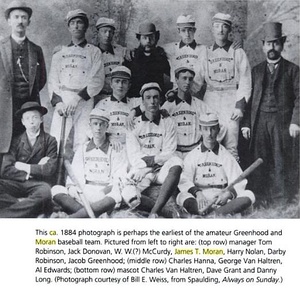 Moran is middle of top row