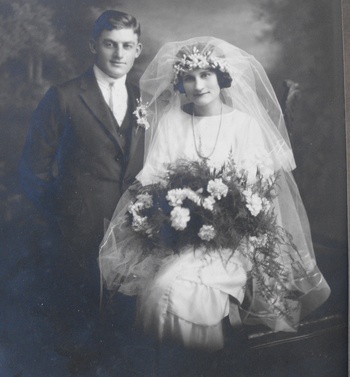 Jasper was born Kasper (or Casper) Most, near Odessa, Russia. Some records say Klinelibenthal, Russia, which was an outpost of Germans living in Russia near Odessa. This is supported by the 1916 Canadian census of Manitoba, Saskatchewan, and Alberta, which lists his nationality as Russian, but his "race" and language as German. The same census also lists the family as German Catholics. This may have influenced Jasper and Margaret's decision to settle where they did in Oakland at 2626 Nichol Ave. It's not far from St. Elizabeth's Church, which was originally founded as a German Catholic church in 1892, but it's unknown if they were members.

Margaret (Margarite in some records) was born in Saskatchewan, Canada, to parents of Russian birth. At least one source says St. Mary's Colony, Saskatchewan, which was a colony of Germans from Russia, who settled near Regina, Saskatchewan.

Jasper and Margaret were married on January 14th, 1924, then entered the U.S. on January 17th three days later via the aptly named town of Portal, North Dakota, the nearest point of entry to Regina.

The 1930 census shows them living in San Francisco, and lists Jasper as an upholsterer, and Margaret as a machine operator, both in a factory. By the 1940 census, they had moved to 2626 Nichol Ave., and were working in upholstery.

As far as I can find out, Jasper and Margaret never had any children.