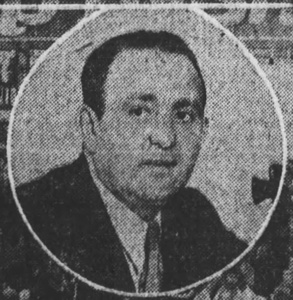 Fredkin was born in Russia (originally part of Poland, now part of Belarus) (*sources vary on the exact day (March 7th or 10th) and year (1894 or 1895)), to B. (Baer Harold?) Fredkin and Edna Leah Abramoff (Fredkin), in a family of four brothers and two sisters. The family came to the U.S. in either 1905 or 1907, and lived for a time in Missouri and Kansas. Fredkin married Lillian J. Baum (Fredkin), and they had two daughters, Evelynne Dorothy Fredkin (Lavick) and (Ida) Jane Fredkin (Wallin). Sometime between 1923 and 1927 the family came to Oakland.

The 1928 directory lists Fredkin as manager of the Stop and Shop Market, and the family living at 3634 Kingsley in Oakland. His brother Perry Fredkin is the assistant manager, and living at the same address with his wife Eva Kaplan (Fredkin). Their brother Mendle Fredkin is listed as a clerk, living at the YMCA. [ Q: Guessing he's 'M B'? ]

Fredkin took over management of the Twentieth Century Market in 1929, 5 which would later house the Oakland Ice Arena.

By 1930, Perry and youngest brother Harry Fredkin had established a grocery store in San Jose. 2

Jay was the owner of the Oakland Ice Arena and worked to promote it with ice shows, hockey games, and skating. Ice skating and figure skating in particular had a resurgence in the mid-1930s in large part because of 3-time Olympic and 10-time World champion Sonja Henie of Norway. In the 1930s she skated in ice shows, and starred in a number of movies.

Daughters Evelynne and Jane were accomplished skaters, as well. Evelynne skated in at a Henie film (probably "Thin Ice"), but turned down the chance to be in a second because she was getting married. The Fredkins said Jane was too young and had to finish high school. (But one wonders if they'd heard of Henie's association with Hitler by then. 4)

I haven't found his burial location yet, but Mendle, sister Bessie Fredkin (Randle) and other Fredkins are buried in San Jose. (ref)