Holmes was born Jayne Williams on July 5, 1886, in Georgia, but by 1900, the family had moved to Los Angeles. Her sister, Bessie Williams (Dones) was a violinist of note in Los Angeles.

Williams married James B. Holmes on February 15, 1906, in Riverside, CA. They had one daughter, Jean Carol Holmes (Johnson). The family didn't live in Oakland very long, and moved around a fair amount, probably following church calls for James. They were in Oakland c.1920 to c.1924, but Jean was born in 1927 in Alabama. By 1930, they had moved to Pennsylvania, and by 1935, to Los Angeles.

"Mrs. Jane Williams Holmes under the pen name Jean Willa Holmes, has published a neat volume of poems entitled 'Lines Lyrique.' Mrs. Holmes was for some time contributor to the Boston Chronicle, later becoming editor of the Poets' Corner in the Star of Zion, which position she still holds." 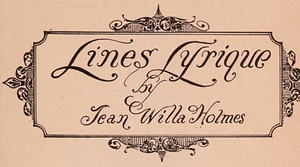 Library of Congress via Internet Archive 2