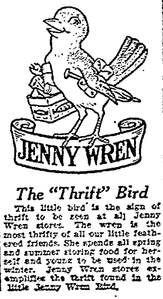 Jenny Wren Stores was a Bay Area chain of grocery stores. It started in 1921 in San Francisco and expanded into the East Bay in 1926. 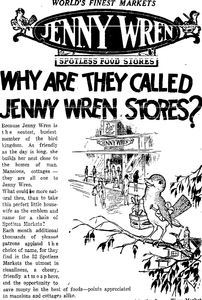 Oakland Tribune 1927 3Jenny Wren refers to a female wren. "Jenny" refers to a female bird or donkey; wrens are considered to be active, fastidious, tidy birds. Given Jenny Wren Stores' tagline "Spotless Food Stores", the choice of a wren seems a fitting mascot. Indeed, a 1927 ad explains that wrens are neat, busy and friendly and that "[Patrons] find in the 52 Spotless Markets the utmost in cleanliness, a cheery, friendly atmosphere, and the opportunity to save money on the best of foods." 3