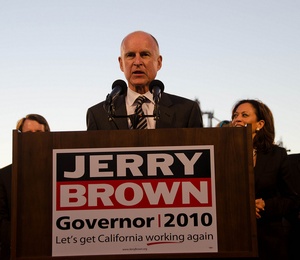 The 10K Plan—dubbed "Jerryfication" by its critics—was Brown's initiative to bring 10,000 new residents to downtown Oakland by 2001.  The Uptown neighborhood is at the epicenter of this redevelopment, which also affected the Jack London Square, Chinatown, and Old Town districts.

Although he was supported by the progressive community of Oakland and campaigned on a Civil Rights and community engagement platform, many progressives ultimately felt betrayed by his focus on a "business as usual" pro-growth and pro-business agenda during his time as mayor.

Brown was responsible for Measure X, which turned Oakland into a "strong-mayor" form of government.

When not in Sacramento, he, his wife Anne Gust Brown, and their dog Sutter lived in Oakland on Skyline Boulevard until 2016. Brown previously lived in the former Sears Roebuck building on Telegraph, and in Jack London Square before that. He used to be seen running around Lake Merritt and in Huckleberry Botanic Regional Preserve on a regular basis.