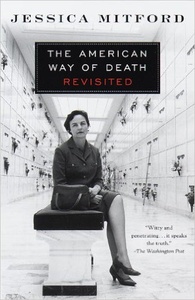 Jessica ("Decca") Lucy Freeman-Mitford (September 11, 1917 – July 22, 1996) was an English author, journalist, civil rights activist and political campaigner. Two of her sisters were well-known supporters of Adolph Hitler; Jessica denounced her family's beliefs and became a communist, being known as the "red sheep" of the family. 2

Mitford's second husband was Oakland civil rights lawyer Robert Treuhaft, who she married in 1943. They settled in Oakland and she became an American citizen in 1944.

After that, much of Mitford's political activity was local. She did work for the East Bay Civil Rights Congress on cases of police brutality by the Oakland Police Department. 2 In 1963, at Treuhaft's urging, she published an expose of the funeral industry, The American Way of Death, which pointed out the sometimes exorbitant fees charged.