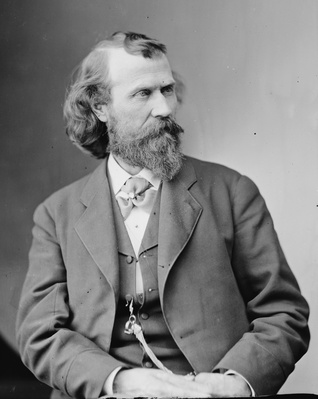 Joaquin Miller was born Cincinnatus Hiner Miller (September 8, 1837 – February 17, 1913) in Liberty, Indiana. As a young man, he changed his name to Joaquin after the legendary California bandit, Joaquin Murietta. At some time later in his life his middle name, Hiner, took on the spelling and pronunciation of the famous German Romantic poet’s, Heinrich Heine.

Before his fame he worked at a number of other professions, including cook at a gold mining camp, surveyor, attorney, school teacher, pony express rider, judge, politician, newspaper editor, conservationist and owner of a pony express service. He attracted controversy for his sympathetic engagement in the Indian Wars and embellished stories. He also lived in Oregon, New York, and Washington DC.

In 1886, Joaquin Miller purchased 75 acres on "The Rocky Hill" which he dubbed "The Hights." He planted it with pines, cypress, acacia, and eucalyptus as well as redwoods and oaks. The famous hermit hosted world-famous literary figures and Oaklanders alike who trekked to "The Hights" en masse. In 1919, his land became Joaquin Miller Park, a California State Landmark. Today the Park encompasses 512 acres which includes a public recreation center, a nature preserve and his memorial.

If you go to Joaquin Miller Park, you can find a number of really neat things built by Joaquin Miller: the Joaquin Miller Abbey where he lived, a Tower to General John C. Frémont, a Pyramid to Moses, the Browning Monument, and a funeral pyre where Miller wanted to be cremated upon his death, plus a statue of him there by Berkeley artist Kisa Beeck. His daughter, Juanita had the Woodminister Amphitheater and the Fire Circle built, where his works were performed for decades. Miller's figure is represented in the Champions of Humanity statue Uptown.

Attitude toward The O

Miller penned the following about Oakland:

Thou rose-land! Oakland! thou, mine own!
Thou sun-land! leaf-land! land of seas
Wide crescented in walls of stone!
Thy tawny, sunlit lion steeps
Leap forward, as the lion leaps!

And tho, the lion’s whelp, begot
Of Argonauts, in fearful strength
And supple beauty yieldeth naught!
Thine arm is as a river’s length.
Thy reach is foremost! Thou shalt be
The thronèd queen of this vast west sea!

Yet here sits peace; and rest sits here;
These wide-boughed oaks, they house wise men:
The student and the sage austere,
The men of wondrous thought and ken.
Here men of God in holy guise
Invoke the peace of paradise.

Be this my home till some fair star
Stoops Earthward and shall beckon me;
For surely Godland lies not far
From these Greek heights and this great sea.
My friend, my lover, trend this way;
Not far along lies Arcady. 1 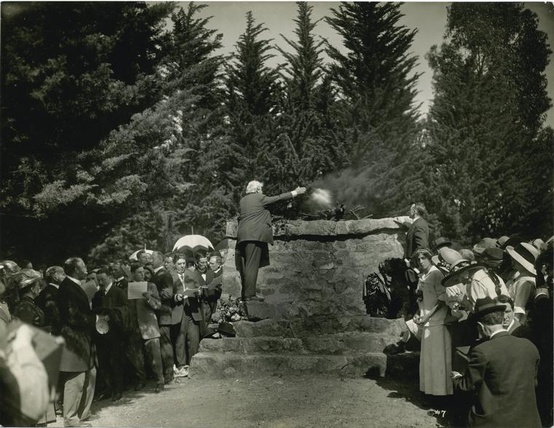 Casting of the Ashes of Joaquin Miller into the Fire