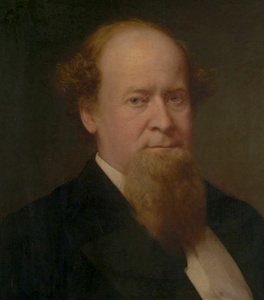 Felton was born in Saugus, Massachusetts in 1827. His father, was a superintendent of an almshouse Cambridge, Massachusetts and one brother, Cornelius Conway Felton, was a scholar at Harvard University. Another brother, Samuel Morse Felton, Sr., was a railroad executive.1 Felton graduated from Harvard in 1847 and worked for a time as a Greek tutor. He then moved to San Francisco and became a partner in a law practice in 1854.6

It appears that Felton was heavily involved with the waterfront issues at the time. waterfront.pdf In 1868, just before serving as Mayor, the City of Oakland did some complicated thing with the waterfront that was supposed to end the water shenanigans with Horace Carpentier. The Oakland Waterfront Company was created, Carpentier was director, then-Mayor Samuel Merritt was made Vice President, Leland Stanford, treasurer. Then Carpentier's interest in the waterfront, through the OWC were transferred to the city and almost all of his waterfront property was deeded to the city. Stock was distributed to Carpentier (46%), Stanford, 35%, Felton, 10% and Edward Carpentier and Lloyd Tevis 9% together.7 He also worked as a lawyer to help get the waterfront back under the control of the City.

Felton was very well known in the city. An article about him running for mayor states that nothing he could tell the public would be news; it appears that Oakland was very familiar with him. felton is running.pdf His ticket was known as the "Livery Stable" ticket and was thought to be the clear winner in advance of the election. livery stable ticket.pdf "It is not often," the Chronicle opined, "that a man of John B Felton's position and antecedents condescends to run for such a position as that of Mayor of a suburban metropolis."8 He was also known as a member of the "Water Front" ticket (which was a Republican ticket), and in the primaries, he ran against Henry C. Lee who ran on a platform of creating a large park consisting of land that Lee owned.9

Felton had a stroke on April 22nd which eventually led to his death. the news was even published in the New York Times.5 Felton died on May 2, 1877 and is buried at Mountain View Cemetery in Lot 2, Plot 410c. His funeral was attended by many from Oakland: the police department, Willis' 16 piece band, the Oakland Guard, the Oakland Lodge No. 188, and many many more. 2  (One obituary states he was elected twice for mayor. What's up with that?)10

The town of Felton, just north of Santa Cruz, is named after John B., who was a nephew-in-law of the founder, Edward Stanly. 4

Felton was appointed Regent of the UC system in 1876.3

Note: lots more material here that doesn't give exact sources for the info.

interview with felton.pdf (The Chronicle interviewed Felton on Feb 20, 1870)