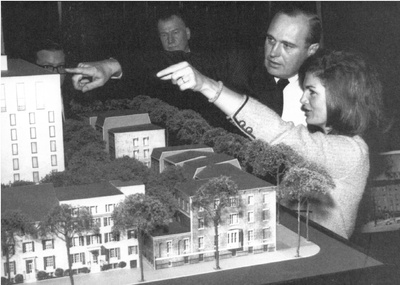 Warnecke worked at his father's firm, Miller and Warnecke, for a time.

John Carl Warnecke's firm designed relatively few things in Oakland; local projects include the AT&T building at 1587 Franklin St. His firm also designed the Long Lines building in New York which is owned by AT&T, but also said to include a major NSA listening post. 2

He was friends with John F. Kennedy and Jacqueline Kennedy, and designed Kennedy's memorial grave site at Arlington National Cemetery. 1 The original plan was for Kennedy to be buried in Massachusetts, but Warnekce suggested the Arlington site because Kennedy had found it so peaceful. 3