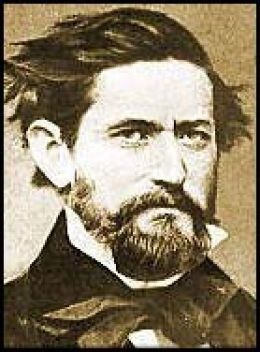 Col. John "Jack" Coffee Hays (January 28, 1817–April 21, 1883) was a Texas Ranger who is renowned for hunting down the Comanche people, along with other Native American (Indian) tribes in Texas. He also was a commander during the Mexican invasion of 1842 and again in the Mexican-American War (1846–1848). And he is one of the founders of Oakland.

Hays was born in Tennessee in 1817, and was the grand-nephew and neighbor of future president Andrew Jackson. An adventurous sort, "Jack" left home at 15, worked as a surveyor in Mississippi, and eventually made his way to Texas in 1837, where he joined the army. He married Susan Calvert (December 27, 1827–April 28, 1883) in 1847 in Texas. They were married at the Magnolia Hotel in Seguin, Texas which was owned by Susan's father, Jeremiah Calvert. It is still standing.

In 1849, the Hays moved to California where Jack became Sheriff of San Francisco, where he holds the historical distinction of being the first elected sheriff. In part because of his reputation as a war hero, he won the election handily.

Around 1852, Hays bought large sections of land in the East Bay. Unlike Horace Carpentier and his partners, Hays negotiated with the Peraltas in good faith. 2 Hayes was appointed U.S. Surveyor General for California in 1853 by President Franklin Pierce. He resigned his position as sheriff of San Francisco to take the position.

Moving to California didn't bring Jack's Indian-killing days to an end. In 1860, he led a group of volunteers in Nevada to fight in the Paiute War, in the Second Battle of Pyramid Lake.

He is considered one of the founders of Oakland. Besides large real estate holdings, he was a founder and director of Oakland's Union Savings Bank, a major stockholder in the Oakland Gas Light Company, and a director of the Deaf, Dumb and Blind Asylum in nearby Berkeley.

Jack and Susan lived on a "beautiful tract of land along Temescal Creek in Oakland called Fernwood, located today at Mountain Boulevard and Thornhill Drive." 1 The canyon was frequently referred to as "Hays Canyon" or "Jack Hays Canyon", even after Hays' death. Hays arranged to grade and improve Canyon Road, which twisted down through the Temescal valley from his property toward downtown Oakland; that road later became Moraga Avenue.

John Coffee Hays died at his Fernwood home in Oakland on April 22, 1883 at the age of 66, after a long illness. Hays is interred in Mountain View Cemetery. Susan and the children are interred there also. 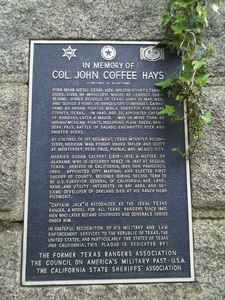 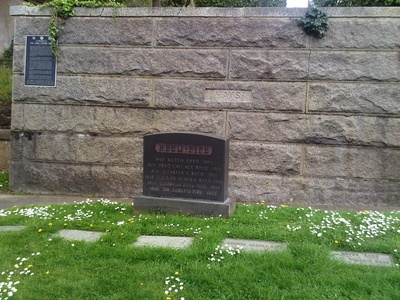 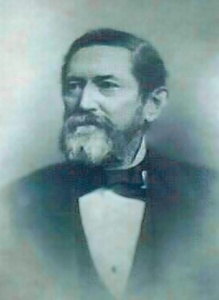