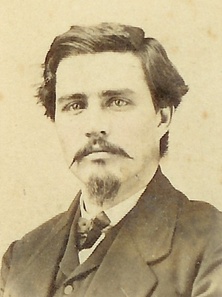 John Edgar McElrath (January 2, 1844–May 6, 1907) was a prominent Oakland attorney born in Citico, Monroe, Tennessee, who married into an even more prominent Oakland family.  He served as a soldier in the Confederate Army during the Civil War, rising up to the rank of Major.

McElrath was born January 2, 1844 to Hugh McDowell McElrath and Elizabeth Lowrey Morgan (McElrath).1, 2 He was the great-great-grandson of Gov.John Sevier (September 23, 1745–September 24, 1815), an American soldier, frontiersman and politician, and one of the founding fathers of the State of Tennessee.3 He was the great-grandson of Elizabeth Lowrey Sevier, and was listed on the 1851 Siler Roll and the 1852 Chapman Roll as a male of mixed Eastern Cherokee ancestry. He was admitted to the Eastern Cherokee By Blood application prepared by Guion Miller in 1906-1910.4 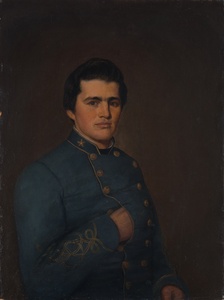 "McElrath, a southerner, has just left the room. He came to bid me goodbye for he is going to the South and doubtless he will join the Confederate army.  He is as good a fellow as ever breathed and he cried like a baby when he bade me goodbye.  He and I have been right good friends .... I will never see him again this side of the grave.  He told me:  `dear fellow Abbot.  Men will thrash us to pieces, you have all the power, but God knows it shall not be without a struggle!  No one loved the union more than I and you cannot know what it will cost me to raise my arms against the stars and stripes and God has willed it and God's will be done....'"

McElrath was then detailed for staff duty with Gen. Kirby Smith, who assigned him to the Cavalry Brigade, commanded by Colonel Benjamin Alston, and took part in the invasion of Kentucky under Gen. Bragg.  On Dec. 11, 1862, he was was appointed Quartermaster, with rank of Major of the Cavalry, after which he ordered to Vicksburg, and was in all the battles around that city, surrendering to Gen. Grant July 4, 1863.

He was exchanged in time to join the Army of Tennessee and take part in the battle of Chickamauga, Sept. 18, 1863.  McElrath was also in the battles of Lookout Mountain and Mission Ridge; as well as all the battles between Dalton, Ga., and Atlanta, Ga.

He finally took part in the battle of Goldsboro, and surrendered April 26, 1865, in North Carolina.

On his return from the Army he began the study of the law, and was admitted to the Bar in Knoxville, Tenn., on June 1, 1866. He was an attorney and counselor at Cleveland, Tenn. He closes a most interesting letter by expressing the hope “that time will fill up the furrows of hatred and bitterness which the war occasioned, and that a few years may enable us to think of it only as an incident common to all countries. For myself,” he adds, “I hope at least for better times, and trust to the good old Horatian line, “Nil desperandum, post nubile Phoebus;” and he ends by expressing “an earnest desire to be remembered to all my old classmates.”

The Harvard Class of 1864 Secretary’s Report. No. 2 July, 1864 – July 1867, noted that John Edgar McElrath’s name is printed in Italic type. A note prefacing the section reads, “Those who did not graduate with the class are printed in Italics.”4

In June 23, 1869 McElrath moved from Tennessee to San Francisco, where he practiced law until 1887. During that time he resided in Oakland, and in 1887 McElrath moved his law offices from the City to Oakland. 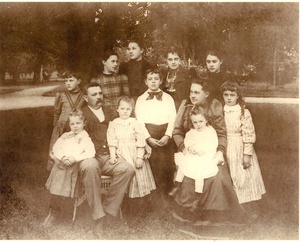 On September 23, 1875 McElrath married married Elsie Ann Alden (McElrath) (daughter of Solomon E. Alden) and together they had eleven children: 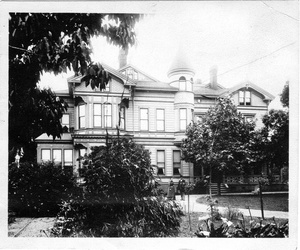 The original home of the Solomon Ellsworth Alden family, then the John Edgar McElrath family. It officially opened as the Baby Hospital in 1914.The 1880 census listed their address as 668 - 17th Street. The 1908 city directory listed their address as 5101 Dover Street. In 1912 Bertha Wright, an Alameda County nurse and Miss Mabel Weed a social worker, along with some other Bay Area women envisioned the first West Coast hospital for babies and children. After establishing the Baby Hospital Association and forming an all male Board of Directors, the women raised $12,500 for the purchase of the McElrath estate at 51st and Dover Streets. The mansion's stables were cleaned out and on September 6, 1914 officially opened as the Baby Hospital (later to become what is now Children's Hospital & Research Center Oakland) with 38 beds.

McElrath was a delegate to the National Democratic Convention in 1880 that met in Cincinnati, where he placed Mr. Justice Stephen J. Field, of the United States Supreme Court, in nomination for President of the United States. He ran for public office as the Democratic candidate for State Senator, and Superior Judge, but was defeated. McElrath was a Royal and Select Mason.

John W. Coleman, along with George McNear and J.E. McElrath, founded the Oakland Consolidated Street Railway, the first electric railway system built in the Bay Area. In 1893, Francis M. Smith bought controlling interest in the company, as well as the Central Avenue Railway Company and consolidated them in what became the Key System. 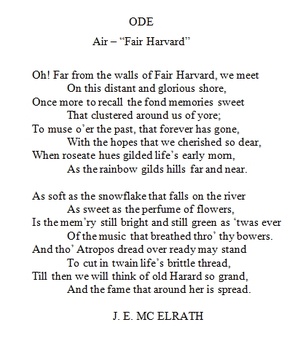 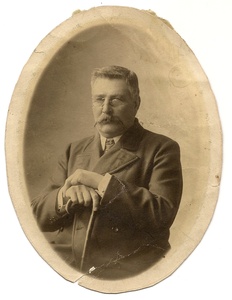 McElrath was visiting his old family home in Madisonville, Tennessee, in 1907 when he passed away at age 63, leaving behind his wife Elsie and their nine surviving children.5 He was brought back to California where he was interred in Mountain View Cemetery along with many other members of the Alden and McElrath families, some in Plot 1, Lot 347, and some in Plot 1, 322. 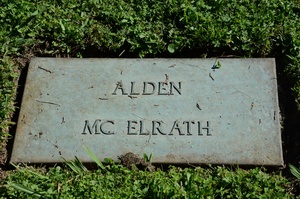